Injuries under the spotlight as Bundesliga continues 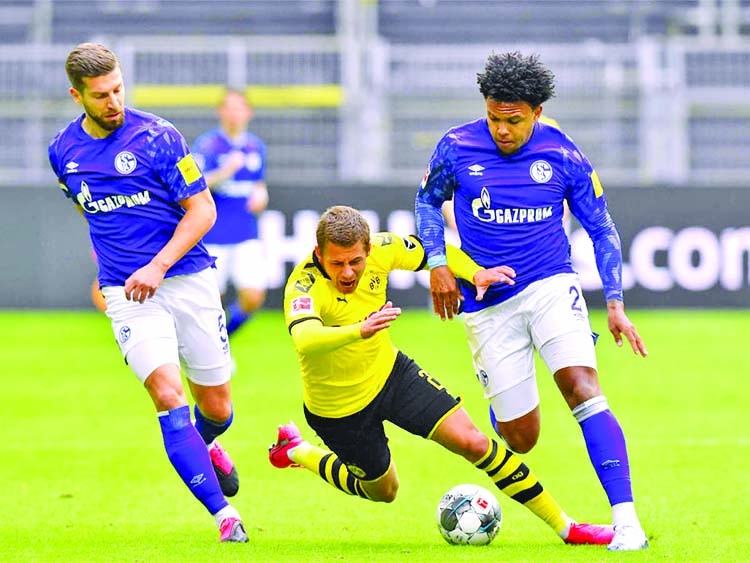 Injuries are likely to be under the spotlight as the Bundesliga stages its second round of matches since the COVID-19 stoppage at the weekend after last week's restart produced a number of victims.
Leaders Bayern Munich, chasing an eighth successive title will host 13th-placed Eintracht Frankfurt on Saturday evening while Borussia Dortmund, who are four points behind in second, visit sixth-placed VfL Wolfsburg in the afternoon. Last week's restart was generally seen as having gone off successfully, albeit in a surreal atmosphere without spectators at any of the games.
However, at least half a dozen players suffered injuries, highlighting concerns about plunging straight into competitive action after a two-month stoppage without warmup matches. The most conspicuous was 17-year-old United States midfielder Giovanni Reyna, who was denied a first start for Borussia Dortmund by an injury during the warmup when they faced Schalke 04 in the Ruhr derby. He was replaced by Thorgan Hazard who himself went off with an injury during the 4-0 win while Schalke 04 pair Jean-Clair Todibo and Amine Harit also suffered injuries.
Other casualties included Sebastian Rudy and Ihlas Bebou of Hoffenheim, Borussia Moechengladbach's Marcus Thuram and Per Ciljan Skjelbred of Hertha Berlin.
Although teams can now make five substitutions per match instead of the usual three - a temporary measure brought in especially to deal with the unusual circumstances - the upcoming flurry of fixtures leaves players even more vulnerable.
A midweek round of matches next week means that teams will be playing three times in a 10-day period. "The players will be flat after 60 minutes," warned Marc Lorenz, a midfielder with second tier Karlsruher, earlier this month. "Even the five substitutions that have been made won't help. That's when the fatigue will come and then the serious injuries."
"There are many who play for a new contract," he added. "If one of them tears a cruciate ligament, no one will sign him. Health is priceless."
The next 10 days will show whether or not his fears are unfounded.
--- Reuters, Berlin