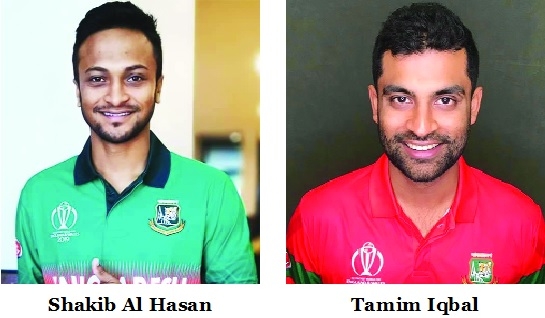 Bangladesh ODI skipper Tamim Iqbal's popular programme 'Tamim' Live Show' is set to end on Saturday after it gave the fans some delightful moments over the past three weeks amid countrywide unofficial shutdown.
The last episode will feature three other cricketers Mashrafe Bin Mortaza, Mushfiqur Rahim and Mahmudullah Riyad, which means four of the Bangladesh's 'Feb 5' will be present in the last show.  There was a expectation that Shakib Al Hasan, the other one of 'Feb 5' will join the last show to make it complete. But Tamim revealed that Shakib, who is now in USA, can't be present in the show due to his personal affairs.
"Our last episode will be aired on Saturday. Many asked me when Shakib will appear in my show..so I contacted Shakib 10/12 days ago because I wanted five of us to present in the last show. But Shakib said due to his personal affair, he can't be with us," Tamim said after his show with New Zealand skipper Kane Williamson on Thursday. "A person could have some work, so there is no problem in it. I don't think we need to discuss 'why Shakib is not present here'.
No need to make it an issue. I am grateful to the three players -Mashrafe, Mahmudullah and Mushfiqur that they agree to come here. Saturday's show will be my last episode," he said.