I am really interested to play in BPL: Williamson 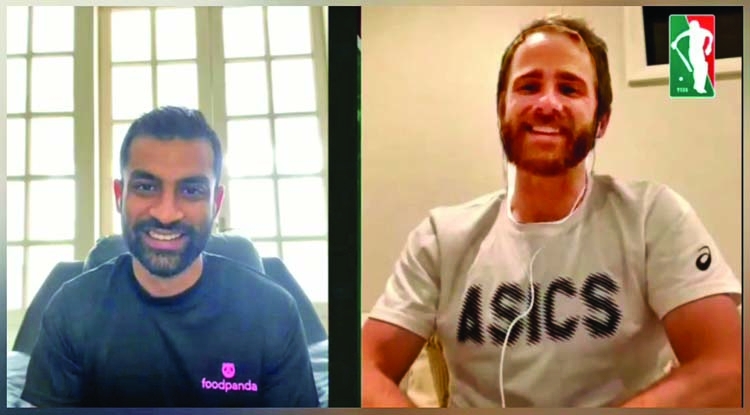 Bangladesh ODI captain Tamim Iqbal and New Zealand captain Kane Williamson joined in the live Facebook chat on Thursday. -Collected
New Zealand skipper Kane Williamson, who was the fifth foreign guest in 'Tamim Iqbal's Live Show', expressed his interests to play the Bangladesh Premier League (BPL), the popular domestic T20 tournament of Bangladesh, which had already been graced by many great cricketers.
The New Zealand skipper, who also leads the IPL team Sunrisers Hyderabad, never plays in BPL but said he will take part in the tournament in future if there is no international commitment. The two cricketers from the two countries shared many things amongst them before Tamim invited Williamson to play in BPL.
"Kane, you definitely know that we have a T20 tournament, BPL. This is a fantastic tournament. So I want you to come here and play the tournament," Tamim told Williamson in his programme, which was aired live on his facebook page and Youtube Channel on Thursday.  Williamson replied in positive way, saying that he is also interested to play the tournament. "I am really interested. If there is no International commitment, I definitely will play in BPL. The competition was really nice and the vibe is excellent.
There are many good things of the tournament. Let's see what happened," Williamson, one of the best batsmen in this era, alongside Virat Kohli, Steven Smith and Joe Root, added.  Williamson indeed is the part of 'Feb 4' in the contemporary cricket world along with Kohli, Root and Smith.
Virat Kohli had already graced Tamim's Live show, which garnered huge plaudits because of uncovering many interesting stories of Bangladesh and foreign cricketers, much to the delight of the fans. Earlier, Kohli's Indian teammate Rohit Sharma, considered as one of the best openers of the cricket's history joined Tamim's live show.
Faf Du Plessis, the former skipper of South Africa also appeared in the show and like Williamson showed his interest to play in BPL. Pakistani legendary fast bowler Wasim Akram however was a special guest in a show which featured three Bangladeshi former skippers-Minhajul Abedin Nannu, Akram Khan and Kahled Masud Pilot.