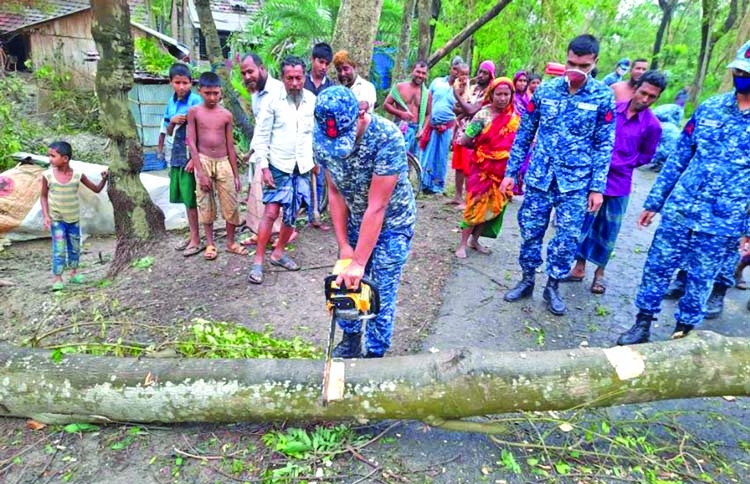 Super cyclone Amphan has flattened scores of houses and trees in the coastal districts of Bangladesh. Members of the armed forces have come forward to help common people with relief materials and other activities. The photo was taken on Thursday morning
Armed forces including Bangladesh Army, Navy and Air Force have taken up comprehensive measures to provide relief goods and medical support to people in the areas affected by cyclone Amphan and to carry out rescue activities. Bangladesh Army has initiated full-fledged preparations to aid people under directives from Army Chief General Aziz Ahmed.
146 disaster management teams of Bangladesh Army are prepared for deployment at the affected areas. 76 army medical teams are also prepared. 12, 500 packets of relief goods are ready for providing to affected people. 16 water purification plants and 14 water bauzers are also ready under the supervision of armed forces.
531 army patrol teams consisting of 1027 convoys have been dispatched to 62 districts to cooperate with civil administration. These patrol teams and units are also working for the prevention of coronavirus. Bangladesh Army has installed water purification plants at Satkhira, Patuakhali and Khulna. Army Engineering Corps is ready to assist the authorities concerned in reconstructing embankments at the coastal districts.
A contingent of Bangladesh Navy consisting of 22 members are working across the coastal areas to provide relief goods and carry out rehabilitation.
A diving team of Bangladesh Navy is also prepared to give necessay srrvice.
Two ships of Bangladesh Navy will provide 600 packets of relief items in Bhola and 600 similar packets in Hatia. Bangladesh Navy will distribute relief goods in Patuakhali and Barishal too.
A number of aircrafts of Bangladesh Air Force inspected the coastal districts swiftly to assess the range of damages caused by cyclone Amphan. A special team of Bangladesh Air Force including 119 members left for Shatkira to cooperate with the local civil administration in relief work and disaster management.