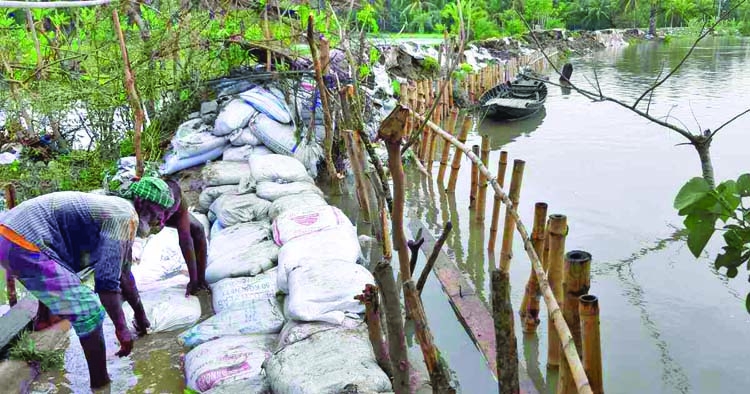 The 8-10 feet tidal surge, triggered by cyclone Amphan, damaged embankments at 83 points in 13 coastal districts, State Minister for Water Resources Zahid Faruk said Thursday.
He came up with the information at an emergency meeting at the secretariat in the morning.
There are 5,556km embankment in the coastal areas during cyclone Ampan, the water level rose by at least 8-10 feet higher than the normal tide which caused damage to embankments in different districts, he said.
Cyclone Amphan has damaged around 7.5km embankment at 84 points in 13 districts, Zahid Faruk said adding that the damaged areas already have been identified.
Expressing hope that the repair work would start soon, Deputy Minister for Water Resources Enamul Haque Shamim said that there are 17,000 embankments across the country.
Disasters are natural which could not be stopped. But under the leadership and direction of Prime Minister Sheikh Hasina, maximum efforts are made to prevent loss of life and property, he said.
Shamim also said that officers and employees of the Water Development Board are at work in affected districts. They are trying to prevent the breakdown with the help of locals and public representatives by using sand bags.
However, quoting Water Resources Ministry, State Minister for Disaster Management and Relief Dr Md Enamur Rahman said 150km flood control embankments were damages while cracks developed at 84 embankments causing a loss of Tk 250-300 crore.
Cyclone Amphan hit Bangladesh on Wednesday with strong wind and heavy rain. It also caused tidal surge which inflicted heavy damage to the embankments and flooded many areas.