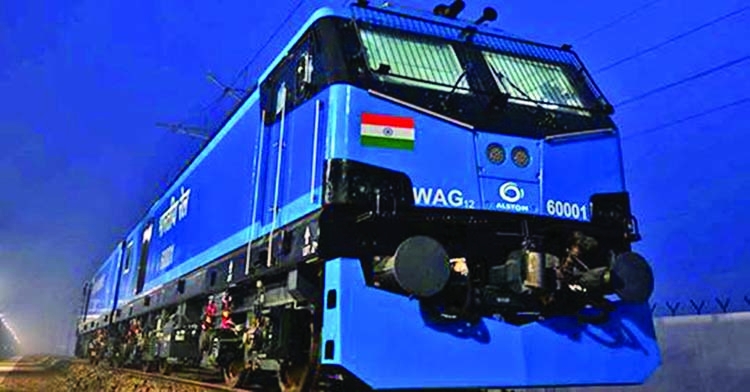 The Indian Railways has introduced its first 12,000 hp electric locomotive manufactured locally by French rolling stock manufacturer Alstom. The locomotive made its maiden commercial run between Deen Dayal Upadhyaya Station to Shivpur on Monday.
It has been manufactured at the Madhepura Electric Locomotive Pvt. Ltd. (MELPL), in Bihar, which is a joint venture between the French major and the Indian railways holding an equity share of 74% and 26% respectively. India became the sixth country in the world to join the club of countries producing high horsepower locomotive indigenously, the railway ministry said in a statement on Tuesday.

Alstom in 2015 bagged a Rs. 25,000 crore order for supplying 800 high-power electric locomotives, one of the largest instances of public-private partnership in the country. "The project will create more than 10,000 direct and indirect jobs in the country. More than Rs 2000 crores has already been invested in the project by the company," the statement said. Did Cloud Computing industry emerged during COVID-19? Oddup Recommended By Colombia Entry of WAG 12B (e-loco) into the Indian Railways fleet will allow faster and safer movement of heavier freight trains capable to haul around 6000 tonnes at a top speed of 120 kmph, Alstom India said in a separate statement.

Planned to be deployed for operations on Dedicated Freight Corridors (DFCs), these e-locos will increase the average speed of freight trains in India by at least 20-25 kmph, Alstom said.

The average speed of freight trains that run on the Indian Railways network currently is around 25-20 kmph. Schedule on track after initial hiccups As part of the contract, after rolling out the first prototype, the company was to supply four more locomotives assembled at its Madhepura facility in Bihar in 2018, 35 locomotives in FY 19-20, 60 in FY 20-21, and 100 every year after that till the completion of the 11-year long delivery period.
ET had reported in November last year that Alstom was struggling to make deliveries to the Indian Railways and had not delivered locomotives after the prototype failed test trials twice.
--- The Economic Times