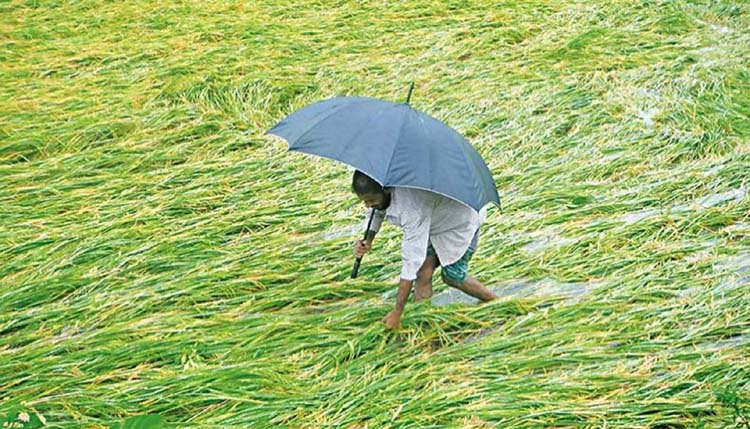 A farmer on Thursday inspects the damaged paddy field after super cyclone Amphan wreaked havoc in many districts across the country. -Focus Bangla
Agriculture Minister Dr Abdur Razzaque on Thursday said the cyclone Amphan wrecking havoc on coastal areas of the country extensively damaged crops on about 1,76,007 hectares of land yesterday.
"Preliminarily, it was assessed that the cyclone affected the crops of about 1,76,007 hectares of land," he told a virtual view-exchange meeting from his official residence here.
According to a preliminary report, Razzaque said, 47,002 hectares of Boro paddy, 34,139 hectares of jute, 41,967 34,139 hectares of vegetables and 11,502 hectares of til were affected or damaged by the cyclone Amphan.
He said since the forecasting of the cyclone on May 15 last, the agriculture ministry had taken massive preparation to tackle Amphan, while all field level agriculture officers remained alert about the cyclone. Necessary advices were given to farmers to minimise the loss of crops in the super cyclone and as a result, the country did not witness massive crop damage, the agriculture minister said.
Despite that, he said, some crops like mango, lichi, banana and vegetable were affected due to Amphan and works are on assess the loss of crops caused by the cyclone. Razzaque said various stimulus packages, including distribution of fertilizers and seeds and providing cash assistance, would be announced in upcoming Aman season to help the cyclone-affected farmers minimise their losses.
Besides, the agriculture minister said, loans will be distributed at four percent rate among the affected farmers and fruit producers.
On the other hand, Environment, Forest and Climate Change Minister Shahab Uddin said his ministry has formed four committees to assess the loss and damage caused by the cyclone Amphan. The bodies were asked to submit their reports within three working days, he said.