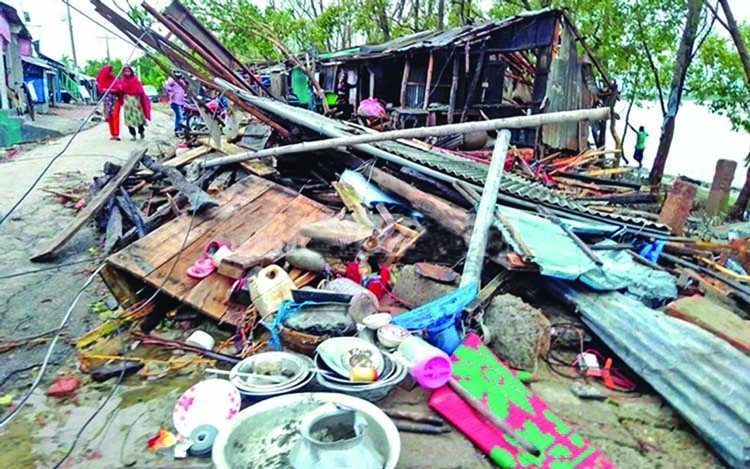 Super cyclone Amphan has ravaged thousands of houses and trees in coastal districts. The photo was taken from Nildumur Kheya Ghat in Satkhira's Shyamnagar on Wednesday. -Agency
Initial estimates by four ministries suggest that cyclone Amphan badly affected 26 districts and caused damage worth Taka 11 billion, State Minister for Disaster Management and Relief Dr Enamur Rahman said on Thursday.
He came up with the figure while addressing an online press briefing in the afternoon and said the final assessment will take about seven days. "The families of 10 people who died during the cyclone will get Tk 500,00 each and damaged houses will be rebuilt by the local authorities," Enamur said. He said 500 bundles of tins and Taka 1.5 million were allocated for each of the 26 districts affected badly by the cyclone.
According to Local Government Ministry, 11 kilometres of road and 200 bridges and culverts were damaged, he said adding that paddy fields were not much damaged but mango orchards counted losses of Tk 1,500 million.
The government will buy mango with relief money in the affected districts, he added. Quoting Water Resources Ministry, the state minister said 150km flood control embankments were damages and another 84 had developed causing loss of Tk 2500-3000 million. "Postal department said their network was also damaged and Power division said they would resume the electricity supply by 9pm tonight," Enamur said.
Fisheries Ministry informed that the damage to livestock was Tk 1,400 million and fisheries Tk 3,500 million.
Cyclone Amphan has killed at least 15 people in eight coastal districts before turning into a land depression.
Most of the dead were hit by uprooted trees or houses that collapsed as the cyclone barrelled into the country from the Bay of Bengal, bringing with it strong winds and heavy rainfall, while more than half of the people in the country lost power supply.
The cyclone moved further inland and weakened gradually. At least 11 people have received treatment for injuries at Jashore General Hospital since Wednesday evening, Dr Abdur Rashid of its emergency department said.
Five people died in Jashore, three in Pirojpur while Patuakhali registered two fatalities as the cyclone left a trail of destruction across the country's coastal districts. Jhenaidah, Satkhira, Bhola, Chandpur and Barguna recorded one death each.
In Jashore's Chougachha Upazila, Khanto Begum, 45, and her daughter Rabeya, 13, died when a tree uprooted by the gusting winds fell on their house in Chandpur village. Khanto's son Al-Amin was also injured in the incident.
In Sharsha Upazila, Muktar Ali, 35, from Bagachra Union and Moyna Khatun, 25, from Goga Pashchimpara were killed by collapsing trees as well while the latter's husband Shajahan Ali was left injured. Another death in Jashore was recorded in Bagharpara - Doly Begum, 48, who suffered similar fate.
Shahjahan Molla, 55, a native of Pirojpur's Mathbaria, succumbed to his injuries severely injured when a wall crashed on top of him as the storm ripped through the area.
The effects of the violent winds and water surge caused by the cyclone also resulted in the deaths of 70-year-old Gelonur Begum in Pirojpur's Dhupoti village and 50-year-old Shah Alam in Umidpur village.
Uprooted trees also caused the death of Nadira Begum, 55, from Jhenaidah's Halidhani village late Wednesday.
An unidentified housewife also died in a similar incident in Satkhira's Kamalnagar, according to the district's Deputy Commissioner SM Mostafa Kamal.
Meanwhile, 40-year-old Jannat Begum from Chandpur's Balia union was hit by a falling tree branch while she was picking mangoes during the storm on Wednesday night. Her family discovered the body in the morning, local representative said.
In Patuakhali's Galachipa, 6-year-old 'Rashed' suffered similar fate on his way to a cyclone shelter. His mother was injured in the incident.
An official at the Cyclone Preparedness Programme named Shah Alam drowned when a boat capsized in the rough waters of Chailabunia canal in Patuakhali. Divers recovered his body nine hours later.
In Barguna, Shahidul Islam, 64, a restaurant owner, died from cardiac arrest on his way to the cyclone shelter, said Upazila Nirbahi Officer Masuma Akhter.
Siddique Fakir, 70, was injured when a tree fell on him during the storm on Wednesday afternoon in Charfason, Bhola.  He died while receiving treatment in Charfason Upazila Health Complex.
Meanwhile, Prime Minister Sheikh Hasina today asked all concerned to take prompt measures relating to reconstruction of damaged houses and distribution of cash incentive and relief materials among the people affected by the cyclone 'Amp-han' that made landfall in Bangladesh on Wednesday evening.
"The work on assessment of overall damages of houses, embankments and roads caused by the cyclone as well as distribution of relief materials and safe drinking water and repairing damaged electricity supply lines in the affected areas started from this morning," said a press release of the Press Wing of the Prime Minister's Office (PMO).
The premier has been monitoring and reviewing round the clock the situation arising out of the cyclone and giving necessary instructions considering the overall condition to mitigate sufferings of the cyclone-hit people, the release quoted PMO Secretary Md Tofazzel Hossain Miah as saying.
As per the directives of the prime minister, Tofazzel said, they asked all the district and upazila officials to work in coordination with the concerned ministries and organisations to estimate the damages caused by Amphan and take measures accordingly.
The PMO, particularly its secretary and directors, have already started working on the matter in coordination with the deputy commissioners (DCs) of the cyclone-affected districts and decided to continue the efforts as usual even on the holidays following the premier's directives, the release said.
It said the prime minister is seeing files offline and online regularly alongside joining the meetings of cabinet, ECNEC, budget, National Disaster Management Council and video conferences with leaders and grassroots officials of 64 districts in the wake of the coronavirus pandemic.
"The PMO has been working tirelessly for the last two days to shift the people safely to the cyclone centres by making arrangements for their foods and introducing healthcare facilities as well as maintaining social distancing," the release added.