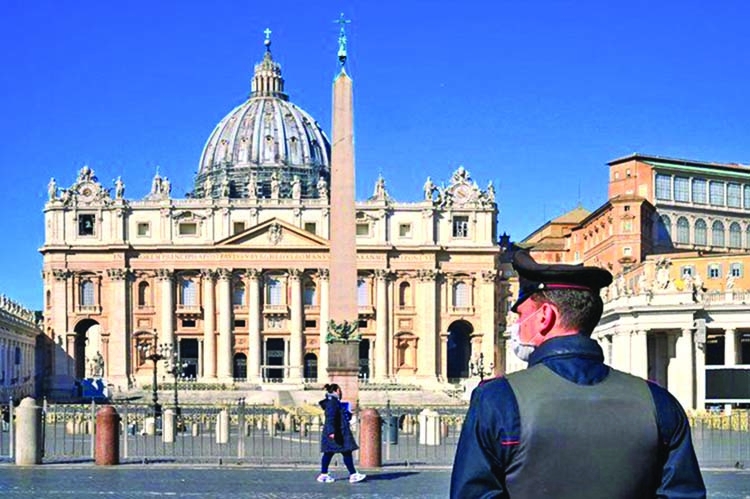 The Vatican expressed hope that a resolution could soon be found through direct talks over Israel's plan to annex large parts of the occupied West Bank. -AFP

The Vatican expressed concern over Israel's plan to annex large parts of the occupied West Bank, saying respect for international law and UN resolutions is an "indispensable element for the two peoples (Israelis and Palestinians) to live side by side."
The Vatican added that it "is following the situation closely, and expresses concern about any future actions that could further compromise dialogue", reports Arab News.
It expressed hope that a resolution could soon be found through direct talks "so that peace may finally reign in the Holy Land, so beloved by Jews and Christians and Muslims." A senior source in the Vatican told Arab News: "We believe the point has been made quite clearly."
Afif Safieh, the first Palestinian ambassador to the Vatican, from 1995 to 2005, told Arab News that its statement "reveals great irritation and exasperation toward Israel's total disregard of international law." He said the Vatican has always taken an interest in the Palestinian question because "Palestine is the geographic location of the birth of Jesus, and of the Christian message and its propagation.
Then there are Palestinian Christian communities. Even though they're relatively small in number, they play a very prominent role in Palestinian society." Safieh, who was also ambassador to the US, Russia, the UK and the Netherlands, added: "The Vatican believes that the absence of an acceptable solution (to the conflict) and the damaging of diplomatic avenues will be a devastating blow for the future of Christians in the Holy Land. The absence of hope on the horizon is pushing this community to shrink even further, and the Vatican believes that the Holy Land shouldn't become only a museum of holy places."
Safieh, who was deputy head of the Palestine Liberation Organization's delegation to the UN, said: "Since the very beginning, the Vatican took a very principled position, a consistent one, playing a role as the conscience for political decision-makers."