Top Indian cricketers hit out at Afridi for Kashmir tweet 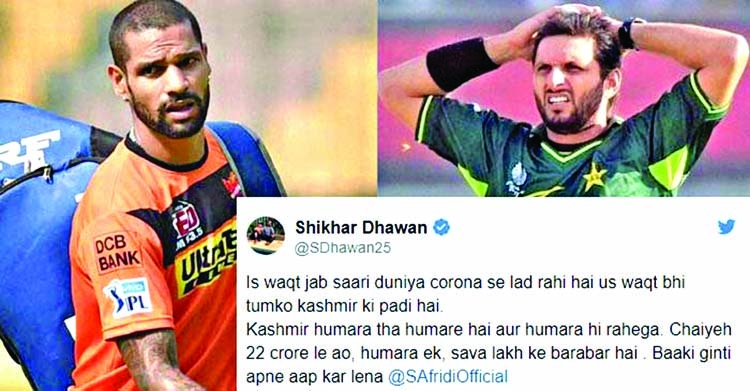 Former Pakistan all-rounder Shahid Afridi and Indian opener Shikhar Dhawan. -Collected
They fought it out on the cricket field and now Indian cricketers are taking on former Pakistan all-rounder Shahid Afridi for his recent tweet on Kashmir. The 40-year-old also took a dig at Prime Minister Narendra Modi while speaking to a few members of the public, which has angered his Indian counterparts even more. Top Indian cricketers like Yuvraj Singh, Harbhajan Singh, Suresh Raina, Shikhar Dhawan and Gautam Gambhir have spoken out against Afridi, report The Quint.
Afridi in a tweet had said that it "does not take a religious belief to feel the agony of Kashmiris...just a right heart at the right place. Save Kashmir." This is not the first time that Afridi has raised the issue of Kashmir. Last year, he had visited the Line of Control (LoC) to "express solidarity with our Kashmiri brethren" following the Indian government's decision to abrogate Article 370 of the Indian Constitution. He had even called for intervention by the UN and the US regarding the same.
Indian cricketers were quick to step up and speak out against Afridi and his Tweet with Suresh Raina telling him to focus on his 'failed nation' instead. 'Leave Kashmir alone' he said. "Gosh! What all a person must do to remain relevant! Even more so for a nation that is living on alms. So, better do something for your failed nation and leave Kashmir alone," Raina said on his official Twitter handle taking an indirect jibe on Afridi.
"I am a proud Kashmiri and it is and will always remain an inalienable part of India. Jai Hind!" he added. "When the entire world is fighting coronavirus, you are concerned about Kashmir. Kashmir was, is and will always be ours. Even if you get 22 crore, our one is equal to 15 lakh. Count the rest on your own," Dhawan tweeted in Hindi. "Really disappointed by Shahid Afridi's comments on our Hon'b PM Narendra Modi ji.
As a responsible Indian who has played for the country, I will never accept such words. I made an appeal on your behest for the sake of humanity. But never again," Yuvraj said on his Twitter handle. Harbhajan also retweeted Yuvraj's tweeted and commented: "Yes never again no matter what."
Gambhir also slammed Afridi for his comments. "Pakistan has seven lakh force backed by 20 crore people says 16 yr old man Shahid Afridi. Yet begging for Kashmir for 70 yrs. Jokers like Afridi, Imran & Bajwa can spew venom against India & PM Narendra Modi ji to fool Pak ppl but won't get Kashmir till judgment day! Remember Bangladesh?" said the cricketer-turned-commentator on Sunday.
However, The Asian Age reporter contacted some Bangladeshi cricketers to know their opinions on Afridi's Kashmir tweet but they declined to comment on the issue.