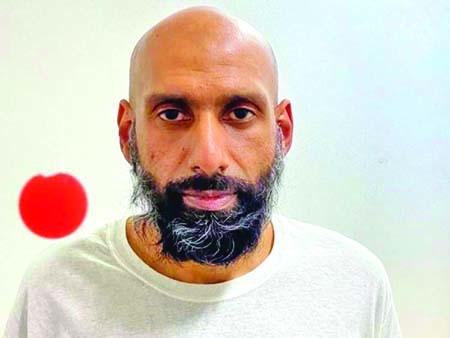 The United States has deported al Qaeda terrorist Mohammed Ibrahim Zubair to India, sources said on Thursday. He was convicted in the US for providing material support and resources to terrorists. Zubair reached Amritsar on Wednesday morning and he is has been put under quarantine, according to Telangana State Police higher officials.
The 40-year-old, who hails from Telangana's capital Hyderabad, did his Bachelor's in Civil engineering from Osmania University and got admission for a Masters' degree in structural engineering in the University of Illinois, Urbana-Champaign, reports ANI.
Around 2006, he moved to Toledo, Ohio, and married a US citizen. He became a permanent resident of the United States in or around 2007.
He is a brother of Yahya Farooq Mohammad. Both brothers used to share literature and speeches of al Qaeda leader Anwar Al-Awlaki, who was later killed in a drone strike in 2011 in Yemen. They were influenced by Awlaki. Yahya Farooq also shared videos of Taliban and Chechen militants.
Zubair was arrested in 2015. He, Yahya and some others were booked by US authorities under various charges including terror funding case.
Yahya was convicted for 27 years and Zubair was convicted to 5 years imprisonment by US district court for the northern district of Ohio western division.
In its judgement, the Ohio district court in November 2015 had said: "Yahya Farooq Mohammad, 37; Ibrahim Zubair Mohammad, 36; Asif Ahmed Salim, 35; and Sultane Room Salim, 40, were each indicted on one count of conspiracy to provide and conceal material support and resources to terrorists, one count of providing material support and resources to terrorists and one count of conspiracy to obstruct justice."
Yahya Farooq and Ibrahim Mohammed (Zubair) both faced an additional count of conspiracy to commit bank fraud.
"According to the allegations in the indictment, Farooq Mohammad, Ibrahim Mohammad (Zubair), Asif Salim and Sultane Salim conspired to provide and did provide material support to Anwar Al-Awlaki in response to his calls to support violent jihad," Assistant Attorney John P. Carlin had said.
"The National Security Division's highest priority is counter-terrorism and we will continue to pursue justice against those who seek to provide material support to terrorists," he added.