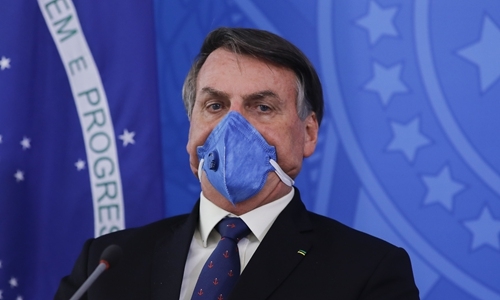 Brazil's Supreme Court has released a video showing President Jair Bolsonaro expressing frustration that he was unable to change security officials and vowing to protect his family.
The video forms part of an investigation into allegations that the president attempted to replace senior members of the federal police.
Mr Bolsonaro denies any wrongdoing.
The growing political crisis comes amid concerns that Brazil could be the next epicentre of the coronavirus pandemic.
On Friday the country recorded 1,001 new deaths, bringing its total to 21,048, and it has the second highest number of cases in the world with more than 330,000.
Two health ministers have left their posts in the space of a month after publicly disagreeing with the government's handling of the crisis.
What does Bolsonaro say in the video?
Addressing his cabinet in the expletive-laden footage filmed in April, Mr Bolsonaro says: "I've tried to change our security people in Rio de Janeiro officially, and I wasn't able to. That's over. I won't wait for my family or my friends to get screwed.
"If one cannot change the law enforcement official, one changes the boss. If not his boss, then the minister."
Brazil's public prosecutor is investigating allegations by former justice minister Sergio Moro that Mr Bolsonaro fired the head of the federal police because he wanted someone in the role who would provide him with police intelligence reports.
The president's sons are under investigation over alleged wrongdoing. Flavio Bolsonaro, a federal senator, has been accused of money laundering and embezzlement. Investigators have accused Carlos Bolsonaro, a Rio de Janeiro city council member, of running a criminal disinformation campaign targeting critics. Both men deny the allegations.
Responding to the Supreme Court's decision to release the footage, Mr Bolsonaro wrote on Facebook that he had been referring to members of his own personal security and not senior police officers. There was "no indication of interference in the federal police," he said.