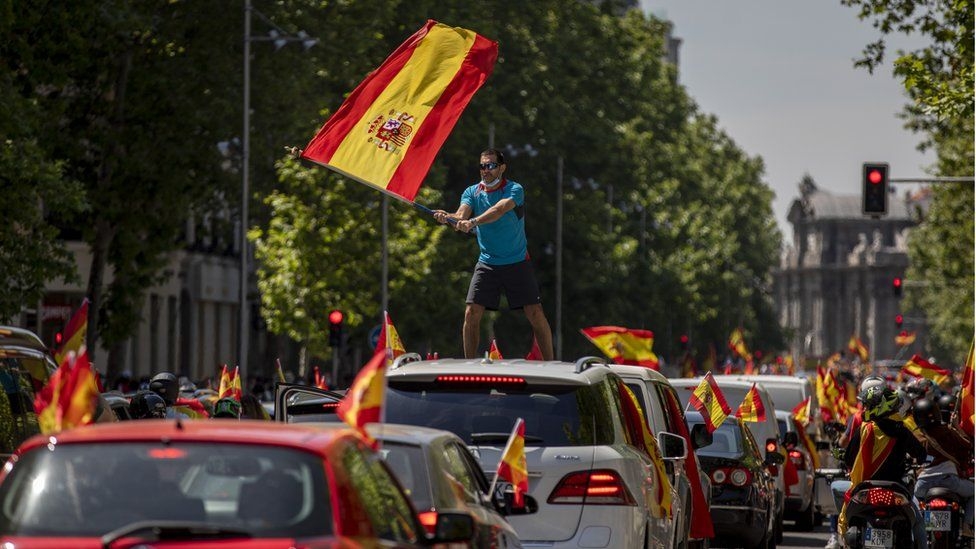 Thousands of people in Spain are protesting against the government's handling of the coronavirus outbreak.
The far-right Vox party urged supporters to drive through major cities without leaving their vehicles in order to maintain social distancing.
Protesters in the capital, Madrid, drove in convoy and waved Spanish flags as they called for socialist Prime Minister Pedro Sánchez to resign.
Spain imposed some of the tightest restrictions in Europe on 14 March.
It has eased restrictions in recent weeks, but Madrid and Barcelona have remained under tight lockdown due to their more severe outbreaks of Covid-19.
Both cities will begin to relax their curbs from Monday by allowing outdoor dining and gatherings of up to 10 people.
Why are people protesting?
The country's two-month lockdown has seen hotels, bars and restaurants all close as well as beaches and other outdoor attractions.
The government says this has allowed it to get the outbreak under control, and the daily death toll has been gradually declining.
But, on Saturday, far-right protesters called for the lockdown to be lifted entirely owing to its impact on jobs and the economy.
Almost one million jobs were lost in March alone, and forecasts suggest the Spanish economy will contract by up to 12% this year as a result of the pandemic.
The demonstrators called for both Mr Sanchez and Deputy Prime Minister Pablo Iglesias, who heads the left-wing Podemos party, to step down over their handling of the crisis.
"It is time to make a big noise against the government of unemployment and misery that has abandoned our self-employed and workers," the opposition Vox party said in a statement.
The party's leader, Santiago Abascal, led the protest from an open-topped bus in Madrid. He wore a face mask and accused the government of being "directly responsible for the worst management of this crisis on the entire planet".
"Let your desire be heard for the resignation of the government," he told supporters in a speech that was broadcast on radio.
Similar protests also took place in Seville, Barcelona and other regional capitals where rows of cars and motorbikes decked in Spanish flags honked their horns.
Others followed the convoys on foot and held placards
While countries such as the UK, US and Brazil have also seen anti-lockdown protests, they have rarely seen social distancing measures respected.
What else is happening in Spain?
While protests against his leadership took place around the country, Prime Minister Sanchez announced two major relaxations of the lockdown.
He said the country's borders would reopen to foreign tourists from July.
Mr Sanchez also announced that football matches in La Liga - the top league of Spanish football - could resume from the week of 8 June.
"Spain has done what it should and now new horizons are opening for everyone. The time has come to bring back many day-to-day activities," he said.
The second division is also set to resume at the same time as the top flight, with reports suggesting the derby between Sevilla and Real Betis will be the first La Liga game to take place.
On Wednesday, Mr Sánchez won parliamentary backing to extend the state of emergency until 6 June.
Spain is one of the countries that has been hardest-hit by the coronavirus outbreak, with more than 28,000 recorded deaths and 234,000 cases.
But the decline in the daily death toll continued on Friday, with 56 recorded over the previous twenty-four hours.