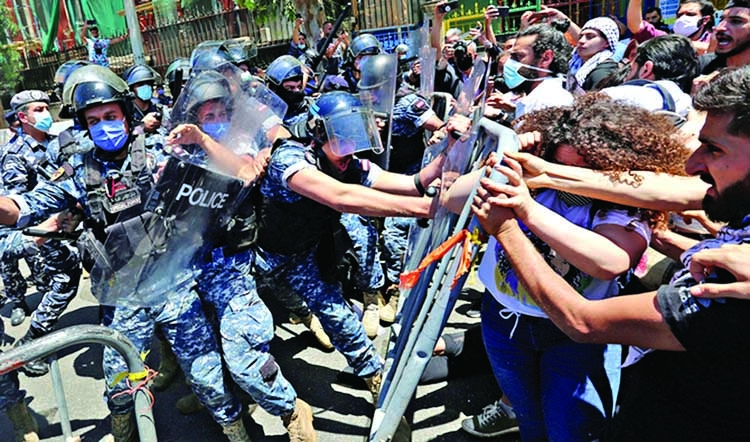 Demonstrators confront with riot police as they try to cross barricades on a road leading to the UNESCO Palace where Lebanon's parliament is holding a legislative session, during a protest against a controversial amnesty draft law, in Beirut Lebanon on
The Lebanese Parliament on Thursday failed to approve a draft law on general amnesty, after tensions rose during a vote and the Future Movement, led by former prime minister Saad Hariri, walked out of the legislative session.
"They want to bring us back to square one," he said. "Every party has its own arguments, as if they want to score points." The Free Patriotic Movement tried to amend the law by excluding "perpetrators of crimes against public funds and terrorist crimes" from the amnesty, reports Arab News.
Minister of Justice Marie Claude Najm, who is affiliated with the FPM, asked for "amendments to the draft law so that it does not include those accused of tax evasion and violating maritime property."
The draft law was referred to the parliament despite disagreements between parliamentary committees over the basic issue of who should and should not be included in the amnesty. The former government, led by Hariri, proposed a general amnesty law before it resigned last October in the face of mounting pressure resulting from public protests.
There were a number of protests during the legislative session, some opposing the adoption of the law entirely, while others were directed at specific provisions within it. The draft law includes an amnesty for about 1,200 Sunni convicts, 700 of whom are Lebanese. Some are accused of killing soldiers in the Lebanese Army, possessing.

transporting or using explosives, kidnap and participating in bombings.
It was also covers about 6,000 Lebanese Christians, most of whom fled to Israel following the withdrawal of occupying Israeli soldiers from southern Lebanon in 2000, as well as nearly 30,000 people from the Bekaa region, the majority of whom are from the Shiite community and wanted for drug trafficking, drug abuse, murder, kidnap, robbery and other crimes.
Hezbollah appeared to agree to a pardon for entering Israel, but object to a pardon for anyone who worked or communicated with the enemy or acquired Israeli citizenship.
Before the session, the Lebanese Order of Physicians highlighted overcrowding in Lebanese prisons, and this health risk this poses during COVID-19 pandemic.
"There are 20 prisons for men, four for women and one juvenile prison holding a total of 8,300 inmates, 57 percent of whom are in the Roumieh Central Prison," the LOP said. It added that 57 percent of prisoners are Lebanese and 23 percent are Syrian, one third have been convicted while the rest are awaiting trial, and the overcrowding is so bad each prisoner has the equivalent of only one square meter of space. The organization described the situation as "a time bomb that must be avoided."
In other business during the session, as part of anticorruption reforms required as a condition for receiving international economic aid, the Parliament approved a law to increase transparency in the banking sector, with responsibility for this resting with the Investigation Authority of the Lebanese Central Bank and the Anti-Corruption Commission.
It also endorsed a draft law to create a mechanism for top-level appointments in public administrations, centers and institutions. An amendment was added to prevent ministers from changing or adding candidates for the position of director general. The FPM opposed this, while Hezbollah and the Lebanese Forces voted in favor. Hariri accused the FPM of having a "desire to possess the entire country."
MPs rejected a draft law to allow Lebanon to join the International Organization for Migration because, said MP Gebran Bassil, "it's unconstitutional and facilitates the accession, integration and settlement process." Lebanon hosts about 200,000 Palestinian and a million Syrian refugees.
The session sparked a wave of street protests. Some of them, led by the Syrian Social Nationalist Party and the Lebanese Communist Party, opposed the approval of a general amnesty that includes those who fled to Israel.
Protesters burned the Israeli flag in Sidon in protest against a law that "affects Israeli agents who sold their land, fought their people, and plotted against them." They set up a symbolic gallows on which they wrote: "This is the fate of Zionist agents who fled execution."
Others, including the families of Muslim detainees, staged demonstrations in support of the amnesty.