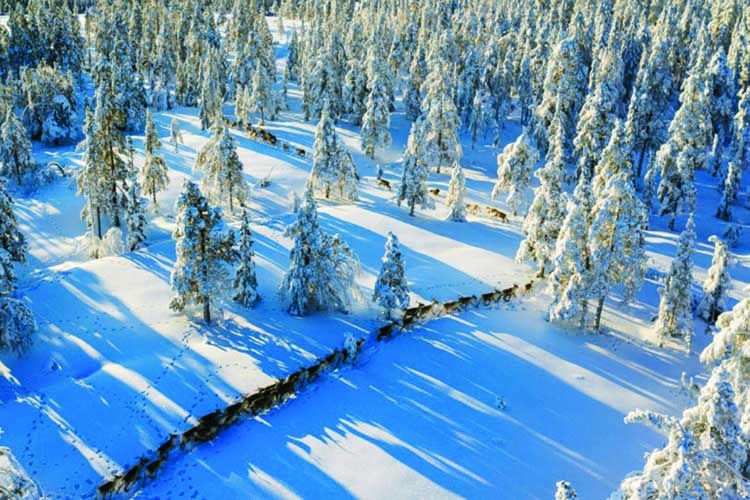 Reindeer herders in Sweden's indigenous Sami community say they are having to adapt to fluctuating weather temperatures. -AFP
Once, the lynx, wolverines and eagles that preyed on their animals were the main concern for reindeer herders as they moved them to find food in the winter. But now Margret Fjellstrom and Daniel Viklund, a married couple from Sweden's indigenous Sami community with hundreds of tawny reindeer, worry about a new threat.
Shifting weather patterns in northern Sweden are forcing them to go further afield to find grazing for their hungry reindeer, pushing up costs and taking more time. Dressed warmly in jackets and ski pants against the minus 17-degree-Celsius (1.4 Fahrenheit) temperatures, the couple watched on a February morning as their animals pawed through deep snow for the lichen they eat. It's their main food source in winter on the hillsides near Sweden's Baltic Sea coast.
Back when snowfall like this was a regular occurrence, Fjellstrom's herder parents would follow the same migration routes year in, year out, stopping at tried-and-tested spots for food. But that isn't the case now. "It can rain in January, it can snow in May, there's no logic to it any more," Fjellstrom, 39, said, sitting with Viklund by their snowmobiles.
Between 1991 and 2019, parts of northern and eastern Sweden saw a rise in average temperature of nearly two degrees C compared to the 1860-1900 period, Sweden's meteorological institute said in a report.
For several days in early January, temperatures in the north climbed about 10 degrees C more than normal, the institute said. And on January 2, three weather stations in central Sweden reported their highest temperatures for the month since 1971.

Unseasonably high temperatures cause the snow to thaw and freeze again when the cold returns, building up thicker layers of ice that prevent the reindeer from digging down through the snow to the lichen.
To ensure they will find food during the migration, the couple spends two months taking turns to scout out unfamiliar areas, before setting off with the animals.
Moving the reindeer from their summer pasture now often involves navigating them around motorways, windfarms or hydroelectric projects. The journey this year took nearly twice as long as it would have done in predictable weather, Fjellstrom said. "The biggest problem today is climate change," she bemoaned.
The Sami have herded reindeer across areas of northern Sweden, Norway, Finland and Russia for generations and are thought to number between 80,000 and 100,000, with many living above the Arctic Circle.
In Sweden, only the Sami are allowed to herd the animals, raised for their meat, pelts and antlers. Fjellstrom and Viklund annually move their herd from Dikanas, a village 800 kilometers (500 miles) north of Stockholm, to the plains near Ornskoldsvik.
They transport them first by lorry, then release them and follow by snowmobile, tracking them using GPS collars.