Modi not in 'good mood' over border row with China: Trump 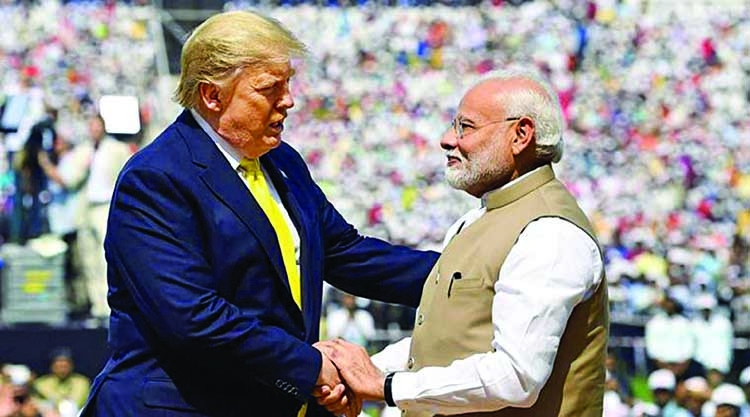 Reiterating his offer to mediate on the border dispute between India and China, US President Donald Trump has said that he spoke to Prime Minister Narendra Modi, who is not in a "good mood" over the "big conflict" between the two countries.
Interacting with journalists in the Oval Office of the White House on Thursday, Trump said a "big conflict" was going on between India and China.
"They like me in India. I think they like me in India more than the media likes me in this country. And, I like Modi. I like your prime minister a lot. He is a great gentleman," he said.
"They have a big conflict ...India and China. Two countries with 1.4 billion people (each). Two countries with very powerful militaries. India is not happy and probably China is not happy," the president said when asked if he was worried about the border situation between India and China.
"I can tell you; I did speak to Prime Minister Modi. He is not in a good mood about what is going on with China," Trump said. A day earlier, the president offered to mediate between India and China.
Trump on Wednesday said in a tweet that he was "ready, willing and able to mediate" between the two countries.
Responding to a question on his tweet, Trump reiterated his offer, saying if called for help, "I would do that (mediate). If they thought it would help" about "mediate or arbitrate, I would do that," he said.
India on Wednesday said it was engaged with China to peacefully resolve the border row, in a carefully crafted reaction to Trump's offer to arbitrate between the two Asian giants to settle their decades-old dispute.
"We are engaged with the Chinese side to peacefully resolve it," External Affairs Ministry Spokesperson Anurag Srivastava said, replying to a volley of questions at an online media briefing.
"The two sides have established mechanisms both at military and diplomatic levels to resolve situations which may arise in border areas peacefully through dialogue and continue to remain engaged through these channels," he said.
While the Chinese Foreign Ministry is yet to react to Trump's tweet which appears to have caught Beijing by surprise, an op-ed in the state-run Global Times said both countries did not need such help from the US president.
"The latest dispute can be solved bilaterally by China and India. The two countries should keep alert on the US, which exploits every chance to create waves that jeopardize regional peace and order," it said.
Trump's unexpected offer came on a day when China took an apparently conciliatory tone by saying that the situation at the border with India is "overall stable and controllable."
In Beijing, Chinese Foreign Ministry spokesman Zhao Lijian said on Wednesday that both China and India have proper mechanisms and communication channels to resolve the issues through dialogue and consultations.
Trump previously offered to mediate between India and Pakistan on the Kashmir issue, a proposal that was rejected by New Delhi.
The situation in eastern Ladakh deteriorated after around 250 Chinese and Indian soldiers were engaged in a violent face-off on the evening of May 5 which spilled over to the next day before the two sides agreed to "disengage" following a meeting at the level of local commanders.
Over 100 Indian and Chinese soldiers were injured in the violence. The incident in Pangong Tso was followed by a similar incident in North Sikkim on May 9.
On May 5, the Indian and the Chinese army personnel clashed with iron rods, sticks, and even resorted to stone-pelting in the Pangong Tso lake area in which soldiers on both sides sustained injuries.
In a separate incident, nearly 150 Indian and Chinese military personnel were engaged in a face-off near Naku La Pass in the Sikkim sector on May 9. At least 10 soldiers from both sides sustained injuries.
The troops of India and China were engaged in a 73-day stand-off in Doklam tri-junction in 2017 which even triggered fears of a war between the two nuclear-armed neighbours.
The India-China border dispute covers the 3,488-km-long Line of Actual Control. China claims Arunachal Pradesh as part of southern Tibet while India contests it.
Both sides have been asserting that pending the final resolution of the boundary issue, it is necessary to maintain peace and tranquility in the border areas.
--- PTI