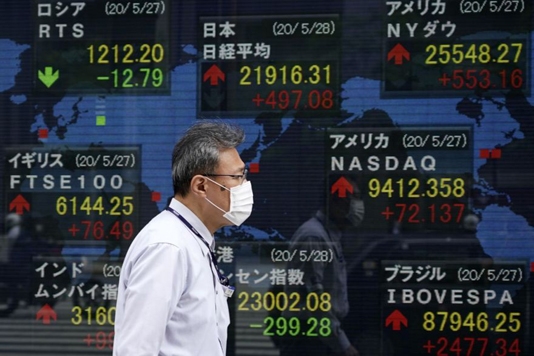 Hong Kong led an Asia-wide market rally Monday as investors breathed a sigh of relief after Donald Trump fell short of imposing strict measures against China, while a further easing of virus lockdowns continued to provide support.
However, violent anti-racism protests across the US have fuelled worries of a pick-up in COVID-19 infections and more pain for the world’s top economy, just as it prepares to ease restrictions.
Dealers had sold up ahead of a news conference Trump called regarding China’s plan for a new security law in Hong Kong but his actions were not as severe as feared.
The president said he would strip several of the city’s special privileges and bar some Chinese students from US universities, and he ordered probes into Chinese companies listed on US financial markets.
“Importantly… there were no new tariffs or broad sanctions, with the phase one trade deal intact, with the outcome less feared,” said National Australia Bank’s Tapas Strickland.
“Some are drawing the link between President Trump’s need for agricultural buys to shore up the Midwest ahead of the November presidential elections.”
Hong Kong’s Hang Seng Index jumped more than three percent, having spiralled last month after China proposed the new law, which some fear could lead to the end of the city as a key financial hub.
The news conference “was long on criticism of China but short on action”, said AxiCorp’s Stephen Innes.
“Most economists think the direct impact of revoking Hong Kong’s special customs status and more export controls will likely be limited, as Hong Kong will remain a free port, and its exports to the US account for less than 0.1 percent of gross domestic product.”
– US protest concerns –
Tokyo went into the break 1.2 percent higher, while Shanghai, Seoul, Taipei and Singapore were also more than one percent higher. Sydney gained 0.7 percent.
The gradual lifting of lockdowns around the world is also adding to the optimistic tone on trading floors, with cafes and bars beginning to open for the start of summer.
But six days of violent demonstrations by thousands of people against police brutality have raised worries that infections could spike again, while curfews have been imposed in Washington DC and other major US cities to prevent fresh rioting.
On Sunday night, police fired tear gas to try to disperse protestors outside the White House.
“The reopening could be disrupted and that can affect local state economies that just began to emerge from the pandemic,” Ben Emons, at Medley Global Advisors, said.
The more upbeat mood among investors put pressure on the safe-haven dollar, which dropped more than one percent against the Australian dollar, while South Korea’s won climbed 0.8 percent and the Mexican peso jumped 0.7 percent.
But AxiCorp’s Innes warned that the deteriorating situation at home could lead Trump to focus on China leading into the November polls.
“With political firestorms igniting across the US, the president may reorient his focus to the old faithful foreign policy and China,” he said in a note.
Observers are keeping tabs on the release later in the week of key US jobs data that will provide a fresh snapshot of the economic damage inflicted by the shutdowns.
On Thursday, the European Central Bank is tipped to unveil hundreds of billions in new bond-buying to get the region through the pandemic crisis, just as EU leaders try to hammer out a joint response.
– Key figures around 0300 GMT –
Tokyo – Nikkei 225: UP 1.2 percent at 22,135.75 (break)
Hong Kong – Hang Seng: UP 3.5 percent at 23,755.27
Shanghai – Composite: UP 1.4 percent at 2,892.69
West Texas Intermediate: DOWN 0.5 percent at $35.31 per barrel
Brent North Sea crude: DOWN 0.6 percent at $37.63 (new contract)
Euro/dollar: UP at $1.1107 from $1.1107 at 2050 GMT on Friday
Dollar/yen: UP at 107.78 yen from 107.78
Pound/dollar: UP at $1.2347 from $1.2347
Euro/pound: DOWN at 89.89 pence from 89.89
New York – Dow: DOWN 0.1 percent at 25,383.11 (close)
London – FTSE 100: DOWN 2.3 percent at 6,076.60 (close) 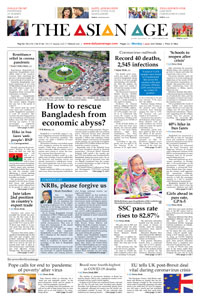