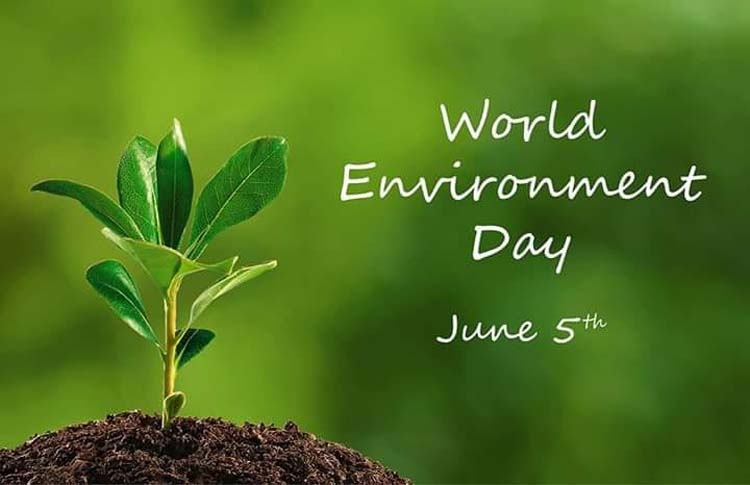 World Environment Day known as  Environment Day or Eco day. It is celebrated every year on 5 june.The day was first observed in 1974 in the city of spokane in the USA.This day  is celebrated  to  encourage awareness and environmental protection.This year theme is "Biodiversity" a concern  that is both urgent & existential, said the United Nations.
"These are exceptional times in which nature is sending us a message: To care for ourselves we must care for nature".

The first World Environment Day celebrated  was held in 1974 since then the day has been used to draw attention to a different  environmental issue on theme each year. It is widely celebrated in more than 143 countries. It is called  the"people's day" to do something  to take care of earth and environment. In 2020,Colombia takes the baton collaboration with Germany.Colombia is one of the world's megadiverse countries. The responsibility for the primary celebrations rotates to a different country each year.

Theme of his year"Celebrate Biodiversity" :

Biodiversity  is the variability among  living organisms from all sources,including terrestrial, marine and other aquatic  ecosystems and the ecological complexes of which they are part,this includes diversity within species, between  species and of ecosystems.Biodiversity  forms the foundation of the vast array of ecosystem services that critically contribute to human well being.

Biodiversity is under serious threat as a result of human activities. The main danger worldwide are population growth and resource consumption, climate change and global warming, habitat conversion and urbanisation,invasive alien species over exploitation of natural resources and environmental degradation. People  have been placed under house arrest in the lockdown,and with that opportunity, the whole world, even in this country,wild animals have roamed the streets of cities and towns. Deer,peacocks,various animals are found in nature.It's in such a situation that nature seems to have regained it's life.In such a situation human atrocities were seen in Malappuram,Kerala. The horrific death of wild pregnant elephant after eating pineapples stuffed with crackers.

Global Warming :
Last year the theme of the day was"Air pollution"
The phenomenon of increasing average air temperature near the surface of earth over the past one to two centuries is caused by human activity, primarily the burning of fossil fuels that pump carbon dioxide (CO2) methane and other greenhouse gasses into the  atmosphere. Already global worming is having a measurable  effects on the planet. We can observe  this happening  in real time in many places.Ice is melting in both polar ice caps and mountain glaciers.

Biodiversity  in the pandemic:

This was supposed  to be a big year for Biodiversity a Super year as the United Nations proclaimed it as recently as February. The links between pandemic  and Biodiversity are becoming better understood and appreciated. So much so that we re seeing the growth in an emerging  discipline, planetary, health, focusing on the connection  among  the well being of humans other living things and natures ecosystems.
The emergence of Covid-19 has underscored the fact that,when we destroy Biodiversity, we destroy the system that supports human life.As the virus has spread , so has the lockdown;positive changes in nature continue to be so visible. Although human life is become miserable due to infection of corona virus but the universe is slowly regaining it's vitality. When people are busy saving their lives,they no longer have time to pollute nature.And in that respect, nature own form is visible.
The outbreak of the corona virus is so terrible that the world has stopped. This is not exactly new.Nature is said today due to the cruel  oppression of people in all ages.Researchers  have long known that infectious diseases  typically arise at the nexus between nature and agribusiness, mining and other human activt.The Ebola(2014-2016)outbreak  in West Africa was the result of deforestation, leading to closen contact between  humans and wildlife. The Avian flu was linked to intensive poultry farming and the Nipah virus resulted  from the intensification of pig farming in Malaysia (1998-1999). (Ref.google)

At last want to say, It's not yours, not mine, It's ours. So, protect your mother Who nourish you.Happy World environment Day!