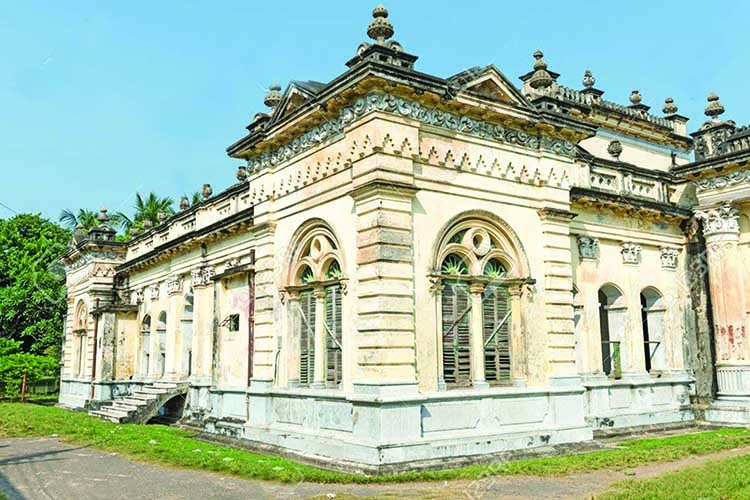 Natore Rajbari (also known as Pagla Raja's Palace, Natore Palace) was a prominent royal palace in Natore, Bangladesh. It was the residence and seat of the Rajshahi Raj family of zamindars. Famous queen Rani Bhabani lived here and after the death of her husband, expanded both the estate and the palace. Natore Zamindari was one of the largest Zamindaris of bengal.
The originators of this Zamindari were Ramjivan and Raghunandan both sons of Kamdev. Ramjivan's daughter-in-law was Rani Bhawani (1716-1795), a legendary name in Bengal politics in the 18th century and an endearing personality in everyhome of the country due to her boundless generosity and public spirit.
After becoming ZamindarRamjivan built his Rajbari at Natore occupying a huge area of 50.42 acres of land and it is enclosed within two rings of defensive moats-one within the other.The moats are now dotted with large tanks,orchards and flower gardens surrounding the derelict ruins of the seven surviving detached palaces.
Of these only four deserve description while the rest are in advanced stage of disintegration and are of no architectural significance.After the death of the great queen, her adopted son Ramkrishna ruled the area. After his death, his two sons Sibnath and Vishwanath became the co-sharers of the NatoreZamindari in 1778. The whole Zamindari was divided between them, and the part of the eldest son was known as "BoroTaraf" and the part of the youngest son was known as "ChhotoTaraf".
The Rajbari was protected on all sides by ditches. There were nine buildings in this Rajbari. They are the palace of BoroTaraf, The palace of ChotoTaraf, KachariBhavanamd Guard House of Borotaraf, KachariBhavan of ChotoTaraf, Rani Bhavan, Guest House, Madhu Rani Bhavan etc.
The main palace block (BaroTaraf), now housing the newly created deputy commissioner's office, faces a large open lawn to the south. Two other single-storied blocks,placed on the west and the south,look over the lawn and are laid out in the form of an English"U" with the open side on the east.
The main northern block, facing south,has a frontage of about 100'-0" with a prominently projecting porch in the middle and two slightly projecting bays at either end, all carrying triangular pediments above.
The elegant central porch is supported on a series of Corinthian columns and semi-circular arches in the typical classical Roman style and the veranda in front of the apartments are also similarly relieved. The whole facade is tastefully decorated with geometric and floral panels in plasterwork.