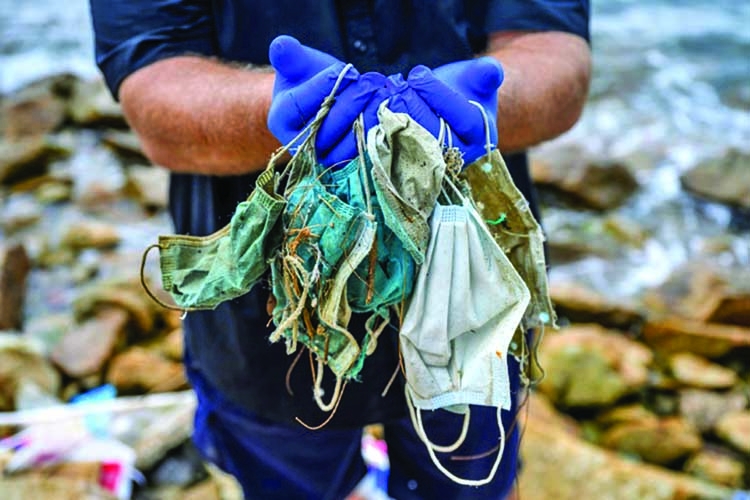 Conservationists are finding face masks washing up on Hong Kong's shores in increased quantities. -AFP
Surgical masks are washing up in growing quantities on the shores of Hong Kong, a city that has overwhelmingly embraced face coverings to fight the coronavirus. Conservationists say the masks are adding to already alarmingly high levels of plastic waste in the waters around the finance hub.
"The single use plastic mask is just another additional burden that we are leaving behind for the future generations on the beach," Gary Stokes, co-founder of OceansAsia, told AFP.
Shortly before the global pandemic struck, the Hong Kong-based environmental NGO launched a year-long study looking at marine debris and microplastics found on one of the city's more remote and uninhabited islands. The five most commonly found items were bottles, polystyrene packaging, lighters, disposable cutlery and straws.
Now masks are floating onto beaches and shorelines. During a recent visit, conservationists counted and removed 70 masks from a 100 metre stretch of beach. A week later, another 30 masks had washed up. "Ever since society started wearing masks, the cause and effects of it are now being seen on the beaches," Stokes said.
Hong Kong's 7.5 million inhabitants produce six million tonnes of waste each year, only around 30 percent of it recycled. Even before the coronavirus emerged, residents often wore facemasks on the daily commute, especially during the winter flu season.
But the emergence of the deadly COVID-19 disease has made mask wearing near ubiquitous. Despite its proximity to mainland China -- the origin of the outbreak -- Hong Kong has largely managed to defeat the virus with just over 1,000 infections and four deaths.

A growing number of companies are now offering reusable masks and the government has also launched an initiative to send all residents a fabric mask that can be washed. But disposable masks remain by far the most popular choice.
"What I'll be waiting to see is when we'll get a dead porpoise or dolphin washed out with masks inside their stomach," Stokes said. "Obviously these are another thing that enters into the marine environment and could be mistaken for food."
--- AFP, Hong Kong