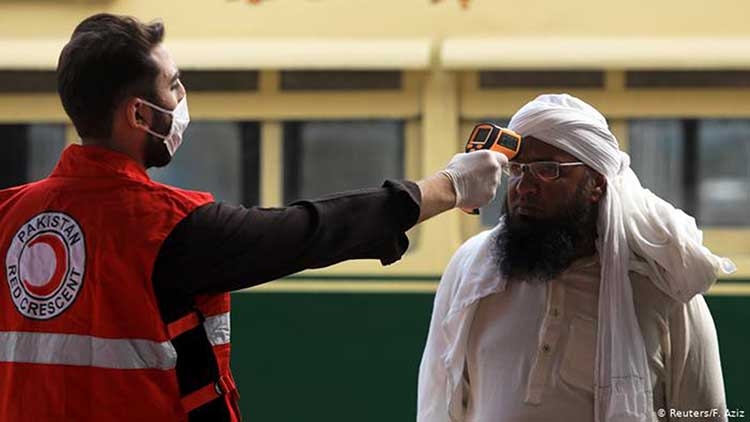 Pakistan seems to be badly struggling to come to terms with the ongoing menace of Covid-19, now assuming alarming proportions in the country. The political and military leadership appear to be clueless including Prime Minister Imran Khan himself who is reeling under severe criticism for his ambiguous approach in handling the pandemic conveying confusing signals to the public and health workers.
In a hard hitting write-up in 'Dawn', the prominent daily of Pakistan, noted journalist Zahid Hussain, writing under an Opinion column on June 3, has lambasted the Imran Khan government for its ham-handed stance in addressing the most dangerous health issue threatening the nation. He has blamed Imran for abdicating his responsibilities in tackling the crisis.
The write-up is particularly critical of Imran Khan for his anti lockdown policy which has led to a deadly spiraling of Covid cases. Imran is also castigated in this piece for having A recently reiterated his earlier stand of describing Covid-19 as another ordinary flu.
This looks a bizarre statement and coming from an elected Prime Minister, it doesn't infuse any confidence among the already demotivated population and instead, make them insecure and directionless. Imran has been further accused of pursuing a policy akin to taking recourse to 'Voodoo' methods.
Such a blatant accusation coming from the intelligentsia shows that the country's focus on the grave matter of Corona epidemic is far from pursuit of a scientific temper or adoption of any modern technological means.
In Lahore alone, there are astronomical numbers of cases of suspected infection. Judging by this alarming number, Karachi, which is more densely populated, is expected to have more cases of Corona infection in the not so distant future.
As it is, the prevailing infection rate is 5.18 %. The administration, at federal, state or district levels are rendered totally ineffective as there is no enforcement of orders and it's a 'free for all' as seen in the volume of crowd at the malls, social gatherings and common market areas. People are not following any orders amid the vague position maintained by the government.
Due to such laxity, corona scene in Pakistan is heading towards a grim future. Prime Minister Imran Khan is also facing condemnation for his decision of premature easing of the lockdown. Significantly, two days prior to his orders of lifting the virtual lockdown, there were already 92 Corona related deaths recorded including of doctors.
Coincidentally, it also recorded highest single day death which stood at 3,039. Imran detractors and knowledgeable quarters feel that Imran has an illusion that lockdown impedes economy.
His priority on health concerns falls short of people's expectations and that's precisely why he wants to restart the tourism activity without realizing the health hazards connected with it. The concept of starting tourism is more disturbing as the governments of Khyber Pakhtunkhwa and Gilgit Baltistan are vehemently opposed to such openings.
According to independent analysts studying the situation in Pakistan to deal with the Corona threat, India and Bangladesh have been more effective in imposing their lockdowns. Both these countries are in the process of gradually lifting (or already lifted) their restrictions and therefore, as compared to Pakistan, there are less cases of Covid-19.
Hence, Pakistan's policy is based on utter confusion and bereft of any clear cut directions. In brief, allegations are agog that PM Imran Khan didn't apply the element of any seriousness to the pandemic resulting into a huge trust deficit between the government and the public.
Amid these grey areas happening, the Chief Justice of Pakistan ( CJP), Gulzar Ahmed, while presiding (June 1) over a five judge bench,  came down heavily on the government for its abject failure in implementing orders. He took umbrage as the court room was jam packed and no one was following social distancing while all the judges were wearing masks.
Angrily, the CJP asked those present in the court that all were they making the court room fully choked in such large numbers?  Also, it implies that there is no respect even to the judiciary .This gives an idea about the lack of any seriousness on part of the government to contain the pandemic's perilous trend.
These apart, people at large also seem to be avoiding undergoing tests in Pakistan apprehending if they are declared positive, there could be social stigmas. So, cases continue to rise. Prime Minister under these circumstances is required to tighten his belt and enforce restrictions conveying clear orders dispelling all confusions so that the prevailing threat is neutralized. He should also try to create awareness amongst the people in general about the pandemic to ensure enforcement, which would then be easy to take effect.
It's a tough challenge before Imran Khan and his military dispensation to fight this menace and he should heed the saner advice of channelizing country's energy into arresting the trend of incremental growth in Covid cases, than diverting his attention and resources towards negative activities detrimental to his country's interests. No wonder, Imran Khan's policy of handling Covid-19 has been described in Pakistan as "Blundering Disaster".


The writer is a freelance columnist on geo-political and security issues. He is a former National Security Advisor to the Prime Minister of Mauritius. The views expressed are personal.