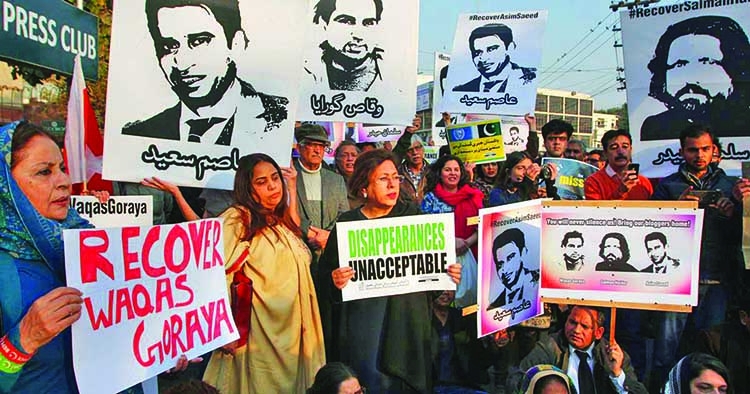 Demo at Balochistan road protesting Enforced disappearances. -Amnesty International
On 14th May 2019, Mohammad Naseem Baloch was abducted by the secretive agencies of Pakistan, near Korangi bridge, in Karachi. A year has passed since his forcible disappearance, and his whereabouts remain unknown. Mohammad Naseem is a law student, and before he got abducted, he was living with his fiancée Hani Gul Baloch, who was studying homoeopathic medicine in Karachi.
Hani Gul was also illegally arrested and disappeared by the Pakistani security forces from her residence hours after Naseem's arrest. According to Hani, she was handcuffed, blindfolded and moved to an unknown detention centre where she was interrogated and subjected to torture. Her fiancé Mohammad Naseem was brought before her, severely beaten, in detention.
In an interview with the BBC Urdu, Hani Gul revealed that their families were kept in the dark about their abduction. The intelligence officials forced them to phone their families and to tell them that they were in the Quetta city. She also informed the media that the investigating officers forced her to confess that she was a member of the banned Baloch separatist militant organization, Balochistan Liberation Front (BLF).
However, Hani and Naseem denied any affiliation with the BLF or any other political organizations in Balochistan. They also refused to make false statements against persons and organizations they were not affiliated.  The reality is that both, Hani Gul Baloch and her missing fiancé Mohammad Naseem Baloch have not been involved in any political activities or student politics.
Hani Gul Baloch was finally released on August 11, 2019, months after her illegal detention. The security forces dropped her near the Iqra University Karachi. She was warned by her abductors to not speak with anyone about her abduction.
Regardless of torture and intimidation, the courageous Hani, soon after her release, went to the protest camp of Voice for Baloch Missing Persons (VBMP) and held a press conference, and revealed the incident of their abduction to the media. The VBMP is a human rights organization, comprised of the families of abductees, campaigning for the release of victims of enforced disappearances for over a decade now.
This was even one of the boldest, unique and symbolic decision that a woman from a Baloch family came before the media and bravely narrated the hapless tale of her abduction and torture at the hands of the Pakistani Intelligence agencies.
Though, Hani is not the only Baloch woman who was the victim of enforced disappearance in Balochistan. Baloch men and women were also subjected to enforced disappearance in the 1970s.Renowned Baloch leader Sher Mohammad Marri, in his recorded video message, claimed that they recovered many Baloch women from brothels in Punjab.
Those women were whisked away by the Pakistan Army during the intensive military operations in different parts of Balochistan in 1970s. Later on, they were sold to brothel houses in Punjab. Hundreds of such shocking stories of Baloch women went unnoticed partly due to the censorship on press and rigid cultural norms of family honor.
The security forces' exhorted immense psychological pressures on the victim's family to keep silent. As a result, they feared to make their predicaments public as they were dead sure that they were not getting any justice form the judicial system of Pakistan.
Hani Gul Baloch despite having bleak faith in the judicial system of Pakistan, filed the case of the enforced disappearance of her fiancé Mohammad Naseem in Sindh High Court, Karachi. As it was expected, the SHC made no progress in this matter.
The worst of all now, Hani Gul Baloch is receiving life threat from the security forces. She is being forced to withdraw the case of Mohammad Naseem from the court and being threatened with severe consequences if she fails to do what she is being told. The security forces tried to kill her twice, running her over by a car.
Hani Gul Baloch has a clear message for her nation, "I want to make this clear to the people of Balochistan that if anything happens to me if I go missing, then the Pakistani spy agencies should be held responsible.
I am not going to be silent nor back off from the struggle for the recovery of Mohammad Naseem and thousands of other victims of enforced disappearances in Balochistan", reiterated Hani.
Hani is no more fighting the case of her fiancé, Mohammad Naseem alone rather, she is the new emerging face of the peaceful struggle of Voice for Baloch Missing Persons, for the recovery of thousands of Baloch missing persons.