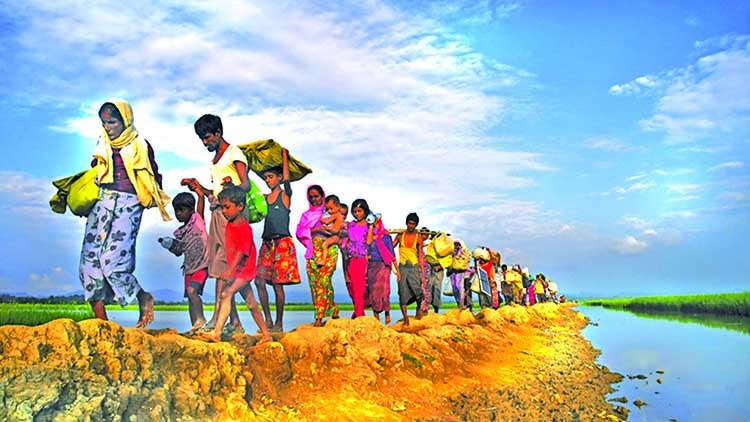 The government of Thailand should prevent the indefinite detention or forced return of Rohingya refugees and possible survivors of human trafficking, Fortify Rights said on Friday.
Thai authorities are detaining at least 35 Rohingya men, women, and children in the Tak Immigration Detention Center (IDC) and threatening to return them to Myanmar, where they face certain persecution, said the rights body.It said the Thai authorities deny that the detainees are ethnic Rohingya, instead alleging they are "Myanmar Muslims."
Fortify Rights confirmed the detainees are Rohingya from Myanmar."The answer to the Rohingya refugee situation is not to lock them up, deny their identity, or send them back to Myanmar," said Amy Smith, Executive Director of Fortify Rights. "Thai authorities have a duty to identify and protect all refugees and survivors of trafficking, including Rohingya."
Between May 7 and June 1, Thai security forces discovered and arrested 35 Rohingya, including six women and 16 children, in the Thailand-Myanmar border town of Mae Sot in Tak Province. All 35 are now in the Tak IDC.
Fortify Rights received information that the 35  Rohingya traveled overland for approximately one to three months from Myanmar's Rakhine State and camps in Cox's Bazar before arriving in Thailand. At least four Rohingya reportedly died en route. According to information received, brokers collected payments of 500,000 to 900,000 Myanmar Kyat (about US$350 to US$645) for transportation to Malaysia and required some to provide further payments upon arrival in Malaysia.
Some of those traveling with the now detained group of Rohingya escaped arrest by security forces in Thailand, and their well-being and whereabouts are unknown.On May 27, Police Colonel Sangkhom Tatso, Superintendent of the Tak Immigration Office, denied Fortify Rights' request to speak with the detainees and denied that the detainees are Rohingya.
"We don't have Rohingya in the IDC, only Myanmar Muslims," Police Colonel Sangkhom told Fortify Rights. "We will return them, but not now as the Myanmar government, at the moment, is focused on the return of documented migrants."
Police Colonel Sangkhom told Fortify Rights that the detainees will be returned to Myanmar when the COVID-19 situation eases.Fortify Rights confirmed through multiple sources that the detainees are ethnic Rohingya from Rakhine State, Myanmar.
The Government of Myanmar is on trial at the International Court of Justice for genocide against Rohingya in 2016 and 2017.There is also reason to believe that the 35 detainees may be survivors of human trafficking; however, Fortify Rights believes the Thai authorities have yet to screen the detainees properly.