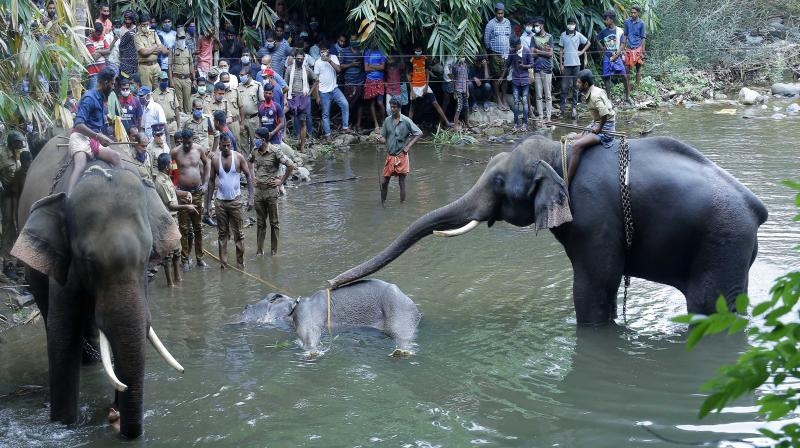 The post-mortem report on the shocking death of an elephant in a river in Kerala has confirmed that the pregnant cow indeed had major wounds in its oral cavity, likely the result of a firecracker burst in its mouth.

Initial speculation by foresters said she had been fed, or herself ate, a pineapple stuffed with firecrackers, a practice commonly adopted by farmers.

Due to her wounds the pregnant cow elephant could not eat for more than of two weeks, and collapsed out of exhaustion in the Velliyar river in Malappuram district. The actual cause of her death was drowning, according to the post-mortem report.

The Kerala government today declared they have made an arrest of a man in the case, and are looking for others. They said they were still investigating whether the death was caused by farmers or poachers. It gave no further details of the arrest.

The death of the elephant, estimated to be 15 years old, has become controversial owing to partisan remarks made by a former union minister regarding the treatment of animals in Malappuram district. Many critics imputed that people in Muslim-majority Malappuram are less sensitive to animals.

The post-mortem report, and quoted by the news agency PTI, said, "The major and incapacitating wounds and injuries in the oral cavity caused localised sepsis and have (sic) most likely occurred following an explosive blast in the mouth.

"This resulted in excruciating pain and distress in the region and prevented the animal from taking food and water for nearly two weeks. Severe debility and weakness in turn resulted in the final collapse in water that led to drowning," said the preliminary report dated May 28, a day after the elephant died.

No bullet, snare or metallic or foreign object was found in any part of the carcass, the report said.

The postmortem procedure, performed at the Thiruvizhamkunnu Forest

Station under the Mannarkad forest division, also confirmed that

the cow elephant was pregnant. "Inside pelvic cavity enlarged uterus with a nearly two months foetus," it noted.

The report said there was extensive necrotic debris of several indistinguishable soft tissues, fully infested with maggots inside the mouth. Also, there were distinct fractures and erosions of major portions of the maxillary bones and medial portions of the mandible (the jaw bone) on both sides.

Externally, apart from the swollen appearance of the lower jaw and skin wounds, there was no other major wound or injury of significance on any other part of the body, it said.

Fruits stuffed with firecrackers, or ‘bait bombs’ are commonly used by farmers in India, especially the southern states, to scare away wild boars.