'We were wrong': NFL to allow players' protest 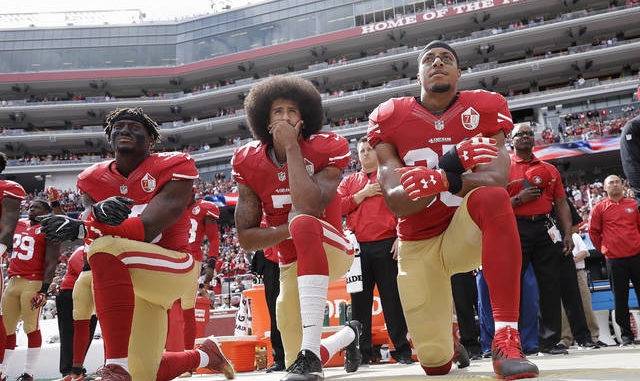 The National Football League has said players should be allowed to protest during the national anthem as rallies against racial discrimination continue.
"We were wrong for not listening to NFL players earlier and encourage all to speak out and peacefully protest," NFL Commissioner Roger Goodell said.
The NFL had previously banned players from dropping to one knee, a practice started by Colin Kaepernick in 2016.
Meanwhile, a large protest is expected in Washington DC on Saturday.
The demonstration is the latest in a series of protests against police brutality and racism that have been held across the US following the death of George Floyd in Minneapolis on 25 May.
Mr Floyd, an unarmed black man in handcuffs, died after a white policeman knelt on his neck for nearly nine minutes. The officer has been charged with murder while three colleagues stand accused of aiding and abetting.
On Friday, Minneapolis officials said police would be banned from using neck restraints and California pledged to follow suit.
What did the NFL commissioner say?
In a video, Mr Goodell denounced racism in the US in comments that came shortly after a number of players urged the NFL to take a stronger stance on racism and police brutality in the country.
"We, the National Football League, believe black lives matter. Protests around the country are emblematic of the centuries of silence, inequality and oppression of black players, coaches, fans and staff," he said.
"I will be reaching out to players who have raised their voices and others on how we can improve."
But on Friday President Donald Trump again voiced his opposition to such protests, saying on Twitter: "We should be standing up straight and tall, ideally with a salute, or a hand on heart. There are other things you can protest, but not our Great American Flag - NO KNEELING!"