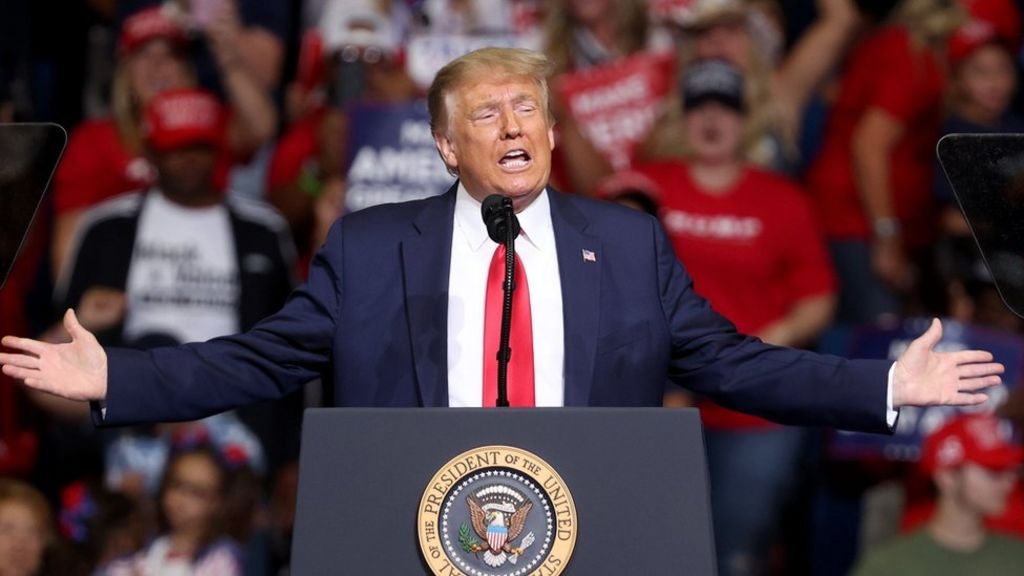 US President Donald Trump has extended a pause on some green cards and suspended visas for other foreign workers until the end of 2020.
High-skilled tech workers, non-agricultural seasonal helpers, au pairs and top executives will be affected.
The White House said the move will create jobs for Americans hurting economically due to the pandemic.
But critics say the White House is exploiting the coronavirus pandemic to tighten up immigration laws.
Who's affected?
In a briefing for reporters, the administration said the freeze, in place through the end of the year, would impact about 525,000 people.
That includes an estimated 170,000 people blocked by the decision to extend a ban on some new green cards - which grants permanent residence to foreigners. The White House first announced it was halting those visas in April, an order that had been set to expire on Monday.
Existing visa holders are not expected to be affected under the new restrictions announced on Monday.
The order also applies to H-1B visas, many of which are granted to Indian tech workers. Critics say these visas have allowed Silicon Valley companies to outsource American jobs to lower-paid foreign employees. Last year, there were about 225,000 applications competing for 85,000 spots available through the H1-B visa programme.
The order will suspend most H-2B visas for seasonal workers, including those in the hospitality industry, except those in agriculture, the food processing industry and healthcare professionals.
The order will restrict J-1 short-term exchange visas, a category that includes university students and foreign au pairs who provide childcare. Professors and scholars are not included in the order. There will be a provision to request exemptions.
L visas for managers and other key employees of multinational corporations will also be suspended.
What's the reaction?
The aim is to get "the best and the brightest" and "the most value for our economy", a senior official said on the background call.
Mark Krikorian, executive director of the Center for Immigration Studies, which favours restrictions, told AP news agency: "This is a bold move by the Trump administration to protect American jobs."
But the American Civil Liberties Union said: "It's the exploitation of a pandemic to reshape immigration law, while superseding Congress."
The new policy is also opposed by many businesses, which rely on foreign workers.
"As the economy rebounds, American businesses will need assurances that they can meet all their workforce needs," the Chamber of Commerce wrote in a letter this month warning against new restrictions.
"To that end, it is crucial that they have access to talent both domestically and from around the world."