Trump looks to regroup in Arizona 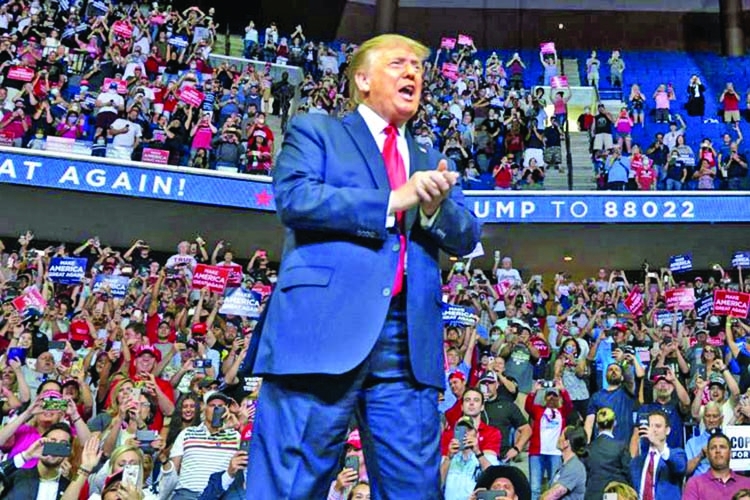 United States President Donald Trump is looking to put the setback of his poorly attended Oklahoma rally behind him with a visit to Arizona on Tuesday, where he'll return to a familiar issue that helped him win the White House in 2016: border security.
Mr Trump's schedule includes a stop to tout progress building his promised border wall and an address to young supporters at a Phoenix church. The state was once a reliably Republican stronghold, but polls show that both Trump and incumbent GOP Senator Martha McSally trail their Democratic rivals, reports Bloomberg.
And despite the president's push to reopen the economy and downplay the coronavirus outbreak, the number of sick in Arizona is again rising. Weekly case counts are up 284 per cent since Governor Doug Ducey, a Republican, lifted his stay-at-home order in mid-May, according Prof Joe Gerald, an associate professor of public health policy and management at the University of Arizona, who works with the state and colleagues to analyse Covid-19 data.
The Arizona visit follows an embarrassment for the president last Saturday, when thousands of empty seats greeted him at his first campaign rally in three months in Tulsa, Oklahoma. He also endured reports last week from a damaging new book by his former national security adviser, Mr John Bolton, that will go on sale on Tuesday.
Mr Trump can ill afford further erosion of his political standing, particularly in a state so crucial to his re-election efforts. He won Arizona by about 3.5 percentage points in 2016 but now trails presumptive Democratic nominee Joe Biden by about four points, according to an average of polling by RealClearPolitics. A loss in the state may cripple the president's hopes of re-election.
In Yuma, he'll commemorate the completion of about 320km of border wall built during his administration, an effort to recapture momentum by revisiting his promises to stop illegal immigration. But the visit also highlights Mr Trump's retreat from promises earlier in his presidency that over 800km of border wall would be completed by the end of 2020.
The construction project was a trademark of the president's first campaign, and Mr Trump has begun to again champion the milestone in recent weeks. He's also claimed the wall has played a crucial role in stopping the spread of coronavirus in the United States.
"Very, very few people are coming through on our border," Mr Trump said last week in an interview with Fox News. "We have a tremendous border. But think of it - and Tijuana, Mexico, it's one of the most infected places on Earth. And we have a wall between Tijuana and San Diego. It's like a beautiful, very powerful wall."
But the vast majority of wall construction during the president's administration has replaced existing fencing, with less than 40km of the 320km built in areas where there wasn't already a barrier. And Vice-President Mike Pence, who chairs the president's coronavirus task force, said last week that the virus is spreading from Americans returning home from Mexico, not from immigration.

On Monday, more than 20 per cent of new Covid-19 tests reported in Arizona came back positive, compared to less than 1 per cent in New York. Arizona reported its seventh straight daily record of confirmed or suspected Covid-19 cases in hospitals at 1,992, up 144 per cent since Memorial Day.
Mr Ducey said last week the state's "trend is headed in the wrong direction", but so far has rejected calls to slow reopening and discounted criticism that he lifted his stay-at-home order too quickly.
In Yuma, Mr Trump will receive a briefing on wall construction and then participate in a roundtable discussion with local leaders. Top officials from the Department of Homeland Security, including acting Secretary Chad Wolf, acting Deputy Secretary Ken Cuccinelli, and Acting Customs and Border Patrol Commissioner Mark Morgan are expected to attend.
While the president and his top advisers believe his strong anti-immigration message helped propel him to the White House in 2016, Mr Trump's decision to frame the 2018 midterms as a referendum on those policies was seen as a strategic misstep. Republicans lost control of the House of Representatives, and Ms McSally narrowly lost her first Senate bid to Democrat Kyrsten Sinema.
She was subsequently appointed to the state's other Senate seat when interim US Senator Jon Kyl resigned, but has badly trailed Democratic challenger Mark Kelly, an astronaut married to former Representative Gabby Giffords, a survivor of a mass shooting in Tucson nine years ago. A Fox News survey released earlier this month showed Kelly with a 13-point advantage.
Democrats are particularly upbeat about Biden's chances in Arizona partly on the strength of Kelly's campaign, but also because they believe the state's changing demographics will put it in their column.
"This state is likely to turn blue, and it's more likely to turn blue than some of the traditional Midwest states that used to be considered battlegrounds," said Arizona Representative Ruben Gallego, who endorsed Biden in March.
Trump's racially charged immigration rhetoric also risks reinforcing perceptions that he bungled the response to the killing of Mr George Floyd, an unarmed black man, while in Minneapolis police custody. Trump responded to subsequent national protests by declaring himself a "law and order" candidate and saying he enjoyed the support of the "silent majority" of Americans.
A substantial majority of Americans - 61 per cent - say they disapprove of Trump's handling of race relations, according to a separate Fox News poll released on Thursday.
Still, Mr Trump is likely to receive a raucous reception when he addresses a "Students for Trump" event in Phoenix hosted by the conservative group Turning Point Action. The organisation, led by 26-year-old activist Charlie Kirk, has repeatedly turned out swaths of young conservatives for high-energy events attended by the president.
Trump's attendance may refocus attention on KMr irk's controversial online commentary, which has included repeating an unproven conspiracy theory that Chinese officials were burning coronavirus patients alive.
Already, the site of the event, the Dream City Church in Phoenix, has announced that they did not know when they rented the space that it was for a presidential visit and that "facility rental does not constitute endorsement of the opinions of its renters".
Phoenix Mayor Kate Gallego, a Democrat, said the city won't enforce its requirement that face masks be worn in public during the president's event, but said she hoped Mr Ducey would do so if he attends.
"He believes in masks and he could be a great spokesman for telling the young people who are there to wear masks," Ms Gallego told CNN. "But the best spokesman would be the president - if he told everyone at that rally it was important to wear masks, I believe they would do it."