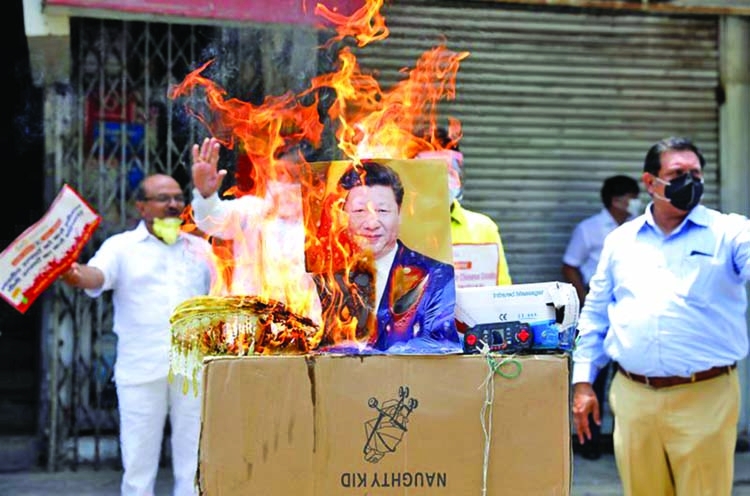 Demonstrators burn products made in China and a defaced poster of Chinese President Xi Jinping during a protest against China, in New Delhi, India, Monday. -Reuters
The skirmish between Chinese and Indian troops over a long-disputed border this month is being treated in New Delhi as the country's worst diplomatic crisis in decades even as it is downplayed by Beijing.China is already locked in diplomatic combat over a host of disputes, from the United States and Australia to Taiwan and Hong Kong, and its handling of the coronavirus outbreak.
It is loath to engage on yet another front - especially one that could push New Delhi closer to Washington, some analysts say. The two sides were working to ease tensions, China's foreign ministry said on Tuesday. Chinese media coverage has been scant.
Beijing's response also points to its interest in de-escalating a crisis over a stretch of border that is less politically important than other territorial priorities, such as claims to Taiwan and the South China Sea and its tightening grip on Xinjiang and Hong Kong.
The contrast reflects the differences in two systems of government - India is the world's biggest democracy, while China is ruled by the Communist Party and tightly controls its media - as well as the domestic realities of a dispute that has little political upside for the leaders of either country.
Since the deaths of 20 Indian soldiers in hand-to-hand fighting in the Galwan Valley, in the worst combat losses on the de facto border with China in more than 50 years, Indian Prime Minister Narendra Modi, a strident nationalist, has faced heated calls for a strong response. Chinese President Xi Jinping is under no such public pressure.
"Indians watch everything that China is doing, but most Chinese only have eyes for international issues related to the U.S. or Taiwan," said Zhang Jiadong, director of the Center for South Asian Studies at Fudan University in Shanghai.Both governments would prefer to play down the clash, he said, but information from the remote battlefield leaking into Indian media forces Modi's hand in a way that would not be possible in China.

"The clash happened because troops from both sides have a different understanding of where the line of actual control lies," he said."This area is a barren hilltop with no economic or geostrategic value. From the Chinese government point of view, it is not worth destabilizing bilateral relations over this," said Zhang.
The border clash did not crack the top 50 searches on China's Twitter-like Weibo on Tuesday. In India, opposition leaders, former generals and diplomats have criticized Modi for failing to protect Indian lives and territory. Many have called for boycotts of Chinese goods. The story garners wall-to-wall coverage in domestic media.
The perceived threat from China - which humiliated India in a brief border war in 1962 - has overshadowed India's COVID crisis, in which the number of cases has crossed 400,000 with no sign of a peak.
Former Prime Minister Manmohan Singh said India stands behind Modi, but he must bear responsibility."We stand at historic crossroads. Our government's decisions and actions will have serious bearings on how the future generations perceive us," he said.
Such language makes it harder for Modi to compromise without losing face, analysts say. Modi rode to power in 2014 vowing to turn India into an economic and military power, but China has pulled further ahead on his watch. Its economy is five times the size of India's, with three times the military spending.
Control Risks said in a note that Modi's administration will likely employ economic measures against China to placate public pressure, instead of risking military conflict with a stronger adversary.
---Reuters, New Delhi