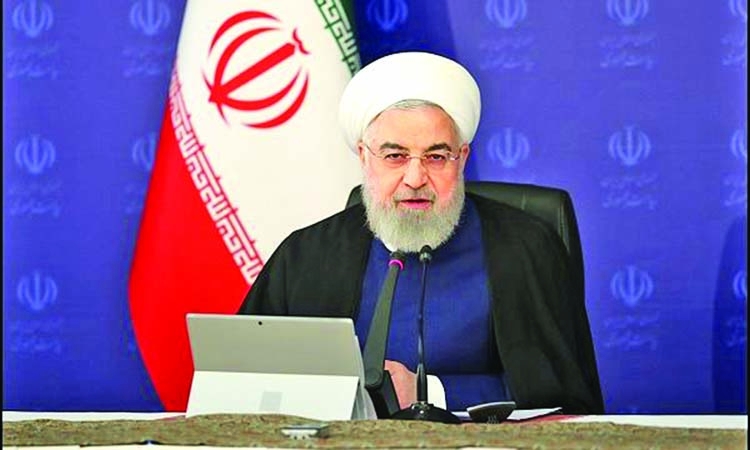 Iranian President Hassan Rouhani
A further slump in Iran's rial is "temporary", Iranian President Hassan Rouhani said on Tuesday after the currency sank to its lowest value in decades. A U.S. dollar was offered for about 205,000 rials on Tuesday, up from 188,200 rials on Friday and 198,000 rials on early Monday, according to foreign exchange site Bonbast.com, which tracks the unofficial market.The official rate, cited by the central bank website, is 42,000. "
The shock created in the foreign exchange market is temporary and has no fundamental economic reason and balance must return to the exchange market," Rouhani was quoted as saying by Iran's state TV.The latest fall comes four days after the UN nuclear watchdog urged Tehran to stop denying it access to two suspected former nuclear sites.
Iranian authorities have dismissed as "an exaggeration" the rial's slump following the resolution, which has raised diplomatic pressure on Tehran. "Psychological warfare against Iran as well as the creation of an unrealistic anxiety among people, are the main causes of the recent fluctuations in the foreign exchange market," said Rouhani.
In 2018, President Donald Trump pulled the US out of Iran's 2015 nuclear deal with six powers and reimposed sanctions on Tehran that mainly targeted its main source of revenue - its oil exports - as well as its financial sector. Iranian authorities said last week that the country's oil revenues have dropped to $8.9 billion in the year to March, from $119 billion in 2011, Iranian media reported.
Already strained by US sanctions, Iran's economy has further deteriorated during the coronavirus outbreak. Iran is one of the worst-affected countries in the Middle East with 209,970 infected cases and 9,863 deaths, according to Iran's health ministry.
There is clearly more social interaction with the easing of restrictions - but officials have suggested the surge in new cases could be down to more testing. President Hassan Rouhani has said this means you will find more cases. Iran's chief epidemiologist at the country's health ministry, Mohammad-Mehdi Gouya, explained: "The main reason for the rising numbers is that we have started identifying [infected people] who have no or mild symptoms."
It currently does one test for every 79 people, which is up from about one test for every 380 two months ago. However, when you look at the proportion of these tests that are positive, there is a clear upward trend since the middle and end of May after it dropped sharply in April. On 29 May, just under 11% of tests were positive - but by 6 June that figure had risen to over 14%.
Health officials have also pointed out the number of daily deaths recorded has been below 100 since mid-April. The daily figure was between 30 and 90 for most of May, but on 14 June it went above 100. This was the first time it had done so in two months.
---Reuters, Dubai