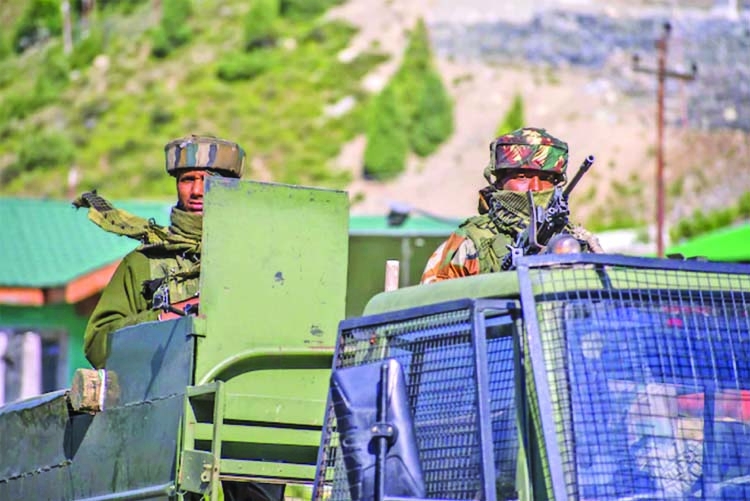 An Indian army convoy drives toward Leh, on a highway bordering China, on June 19 in Gagangir, India. -Getty
On June 15 at 6.30 p., Col Santosh Babu, an Indian army officer from the southern state of Telangana, organized 20 of his men to accompany him on what he thought was a straightforward mission.
He'd been informed that the monthlong simmering tension between India and China at different points of the Line of Actual Control (LAC) in Eastern Ladakh was drawing to a close. Military commanders had agreed to "de-escalate"; the Chinese were to withdraw from areas inside Indian territory.
His job that evening was to ensure that the two tents erected by the Chinese inside the Galwan Valley (named such by the British for Rasool Galwan, a teenage Indian trekker who helped save their lives in 1895) were taken down, per the negotiated agreement.
The Chinese had installed their tented camp at a position called the Y-Junction, one kilometer below Patrolling Post-14 (PP-14), which marks the edge of the Indian side of the LAC. Nine kilometers below was the Indian Army Base Camp. In other words, there was no ambiguity about the fact that the Chinese had transgressed the LAC.
When Col. Babu arrived at the Y-Junction to execute the agreement, he was flabbergasted to find that soldiers of the People's Liberation Army (PLA) refused to dismantle the tents. A heated argument followed that soon erupted into fisticuffs. Both sides were armed with assault rifles, but a protocol signed in 1996 disallowed firing shots within two kilometers of the LAC. Ironically, the original intent behind this pact was to avoid escalation of tensions.
In the melee, one of the Chinese soldiers struck Col. Babu with his fists. The attack on the commanding officer triggered an escalation of tempers on the Indian side. They pinned down at least six Chinese soldiers, according to Indian officials. Col. Babu - hurt but at this moment still fully functional - gave orders to ensure that no further harm should come to them. The remaining Chinese soldiers retreated to their side of the LAC, and the Indians began taking down the tents.
Two and half hours later, as the clock struck 9 p.m., the Indians saw PLA troops return down the PP-14 post. This time, according to official sources, they were close to 300 in strength, dressed in protective rubber suits that looked like riot gear and amassing stones as they came down the mountain ridge. "There was nothing spontaneous about it. They came fully prepared for assault," a senior Indian official told me. Col. Babu wired the base for reinforcements, and 40 soldiers were rushed up.
What followed over the next five hours was, in the words of one soldier, "not just treacherous; but medieval, barbaric and antithetical to what any professional army in the world would do." The Chinese circumvented the no-guns rule by using crude weapons - batons, rocks, iron rods, long wooden spurs tied together with sharp metal nails - photographs of which leaked onto social media platforms and have been verified by officials.
What may have remained a border face-off erupted into a full-blown confrontation when the Chinese used a blunt object to hit Col. Babu on the head. On the jagged mountain peaks, in the pitch dark, the commanding officer fell (several witnesses say he was pushed), taking a vertical tumble of at least 20 feet.
In India's army ethos, loyalty to the "paltan," or battalion, is everything. As a unit, the paltan derives its colors, war cry, greeting and even drinking songs from its regiment. They say, at war, the honor of your regiment will often come ahead of even love for your country.
When the Indian soldiers saw their commanding officer fall in front of their eyes, they went for the jugular. They were grossly outnumbered: Some had been injured and pulled back to the base, while others had to clamber down the ridges to retrieve the body of their commanding officer.
By the end, 30 Indian soldiers were battling 250 Chinese troops in bloody hand-to-hand combat, according to government officials. As they fought in sub-zero temperatures, stones began to unravel from the mountainside and the soil came loose. Several soldiers fell into the gush of the Galwan River. Twenty Indian lives were lost that night in the line of duty.
In the chaos, the Chinese soldiers who had been held back by the Indians escaped. No shots were fired by either side. Apart from the protocol, because of the eyeball-to-eyeball nature of the battle, pulling out a gun could have meant that "friendly fire" would kill one of their own. But 12 PLA soldiers, including the battalion's commanding officer, were killed, according to official Indian sources.
It was the middle of the night by the time senior commanders from both countries worked the hotline and the fight was brought to a close. But as the Chinese left, they took 10 Indian soldiers with them. As morning broke, Chinese helicopters landed on their side of PP-14 and traveled down till the Y-Junction inside India, for the third time, to take their fatalities back. It would be 60 more hours of negotiations before India would get its soldiers back.
By going against the code of war, the Chinese, in a single night, have made India reset its relationship. The rage is unprecedented. A prominent Ladakhi educationist, Sonam Wangchuk, told me, "China is a rogue nation, ethically, politically and morally; the boycott needs to start now."

The writer is an award-winning Indian TV journalist and anchor with more than two decades of reporting experience.