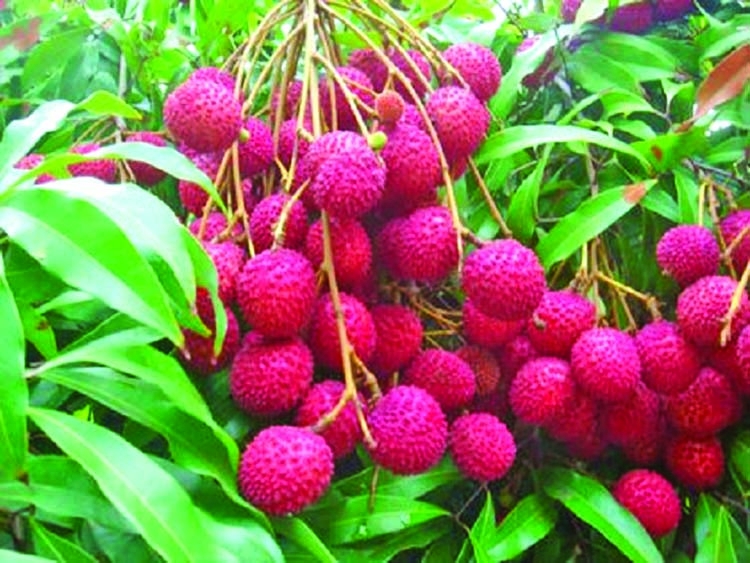 The coronavirus crisis and natural disasters had raised concerns among lychee farmers over turning profits this season. But various government efforts have allayed their worries and farmers and traders have been able to make up for the losses.
"There had been a fear of losing the market due to Cyclone Amphan and the lockdown. But the farmers had managed to get good prices at the last minute due to various initiatives taken by the government," said Shahjahan Badsha, a horticulturist in Pabna, reports bdnews.24.com.
The northern districts of Dinajpur and Pabna are well known for lychee cultivation. Lychees are also cultivated in Gazipur, Narsingdi, Natore, Rangpur and other northern districts. According to the Department of Agricultural Extension in Pabna, three varieties of lychee -- Desi, Mumbai and China-3 -- have been planted across 5,000 hectares of land in the district this season.
Lychee cultivation is expanded in Dinajpur every year, said Touhidul Iqbal, deputy director of the DAE's Dinajpur office. This year, lychees have been cultivated across 6,500 hectares of land in the district, a move up from 3,500 hectares five years ago.
Although the yield of lychees was higher this time than in the previous year, 5 percent of the lychees were damaged by storms and rains, just before it was marketed, he said. "The production is still expected to exceed 30,000 tonnes. Lychees worth around Tk 5 billion will be traded in the largest lychee market in the country." Dinajpur alone has about 10,000 people involved in the marketing and production of lychees with half of that number made up of farmers.
Morshedur Rahman, Dinajpur correspondent of bdnews24.com, said despite the fears of lychee farmers regarding the marketing and price of lychees due to the coronavirus, the lychee market has grown this time compared to the previous two years under the supervision of the agricultural department and the cooperation of the army.
Although the lychee orchards have been hit hard by natural calamities, there is demand for the fruit in the markets at present and good prices are being offered. Lychees are selling for Tk 180-225 per 100 pieces in the gardens. The prices range from Tk 250-300 in the retail market.
Nurunnahar Begum, president of Pabna's Joybangla Nari Unnayan Samabaya Samity, said they were initially concerned about transporting the lychees to different parts of the country amid the coronavirus crisis. However, the government has given them the opportunity to sell the fruit online and the losses have been reduced as special bogeys have been installed on trains to transport mangoes and lychees at low fares.
"It would have been possible to sell lychees worth Tk 10 billion only in Pabna district this year if there was not so much trouble at the beginning of the year," Azhar Uddin, deputy director of the Department of Agricultural Extension.Noor Alam, a fruit trader in Karwan Bazar, said a consignment of lychees arrived in Karwan Bazar a week before Eid-ul-Fitr this year.
Now the supply of lychees is almost at an end. In the high season, 100 lychees would sell for Tk 200-250 but now the price is much higher. The lychees are now selling in the range of Tk 400-600 depending on the quality. Even the China-3 varieties of lychees are now selling at Tk 1,200 per 100 lychees. "
People are short of money now and so the demand is low. Moreover, people are not leaving their homes or visiting anyone's houses out of fear of the virus," Noor said. Despite the low demand, the market situation is strong, he said, adding the price of lychees is Tk 200-300 more than last year.