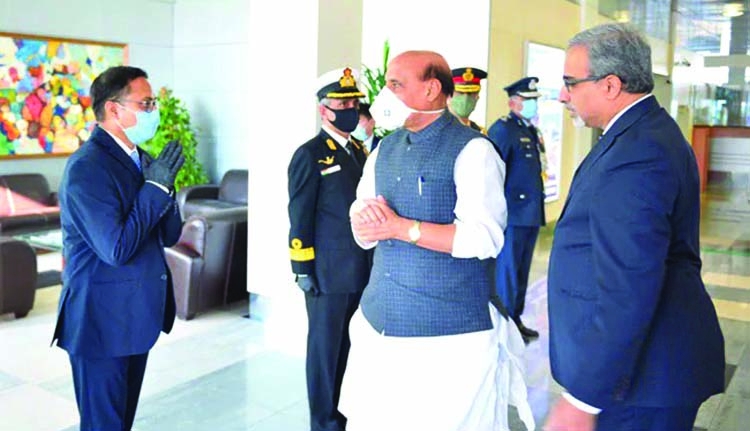 Indian Defence Minister Rajnath Singh and his Chinese counterpart Wei Fenghe. -File Photo
Indian Union Defence Minister Rajnath Singh will not be meeting his Chinese counterpart, who is also attending tomorrow's Victory Day parade in Moscow, the Defence Ministry said Tuesday shortly after Global Times, the Chinese mouthpiece, reported the possibility of such a meeting.
"Chinese Defense Minister Wei Fenghe will attend Russia's Victory Day parade in #Moscow on Wednesday, and likely hold a meeting with his Indian counterpart Rajnath Singh over resolving border tensions: sources," tweeted Global Times.
A spokesperson of the Defence Ministry, however, said there has been no meeting planned between the two.India and China have not formally met since last Monday's violence at Ladakh's Galwan Valley where 20 Indian soldiers died and more than 70 were injured in clashes with Chinese troops.
Last week, foreign minister S Jaishankar had a telephone conversation with his Chinese counterpart Wang Yi regarding Ladakh. During the conversation, the minister had said that the unprecedented development "will have a serious impact on the bilateral relationship" and China had to reassess its actions and take corrective steps.
Both ministers had signed off on a note of de-escalating tension, saying "Neither side would take any action to escalate matters and instead, ensure peace and tranquility as per bilateral agreements and protocols."
Since then, a strong anti-China sentiment has swept the country. As a call to boycott Chinese goods was raised from traders' bodies and the civil society, Chinese equipment was barred from the 4G upgrade of the state-owned Bharat Sanchar Nigam Ltd  and a Chinese firm was dropped from a Rs 471-crore railways contract.
Beijing has maintained its stance that Indian soldiers crossed into Chinese territory, violating the understanding between the two nations.  The Centre has now tweaked rules to promote the Make in India and Atmanirbhar Bharat campaign, which is also expected to add to the odds for Chinese products and services.
---NDTV