CR7, Dybala get Juve back winning on Serie A return 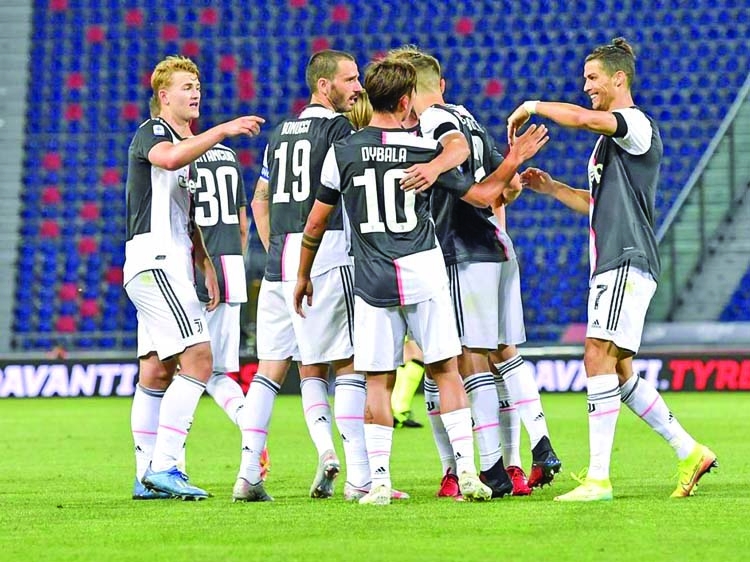 Juventus' Argentine forward Paulo Dybala (M) celebrates with forward Cristiano Ronaldo (R) and teammates after scoring his side's second goal against Bologna on Monday. -Twitter
Cristiano Ronaldo and Paulo Dybala scored early as Juventus put their Italian Cup final woes behind them with a 2-0 win over Bologna on Monday to move four points clear of Lazio on top of the Serie A table.
Portuguese star Ronaldo had missed a penalty in the Italian Cup semi-final against AC Milan, and drew a blank in the final which Juventus lost 4-2 on penalties to Napoli. But the 35-year-old made no mistake in Juventus's first league game since beating Inter Milan 2-0 in Turin on March 8.
He converted a spot-kick earned by Matthijs de Ligt after 23 minutes for his 26th goal for the Turin giants in all competitions this season. Dybala curled in the second on 36 minutes off a Federico Bernardeschi back-heel flick as Juventus, chasing a ninth consecutive Scudetto, opened up a four-point lead on second-placed Lazio. "We need confidence and this victory will help us," said Dybala.
"It's not easy to be brilliant right now, we hadn't been playing for a long time. "If we had won the (Italian Cup) final everyone would have complimented us, because on a tactical level we have had a great game, even if we were not brilliant, but we conceded little. "Today we played a great game, even if after 2-0 we gave up a bit."
Lazio travel north to fourth-placed Atalanta in Bergamo on Wednesday, looking to keep their bid for a first Serie A title in two decades on track. Inter Milan, in third, are nine points adrift of Juventus, and next host Sassuolo.
---AFP, Milan