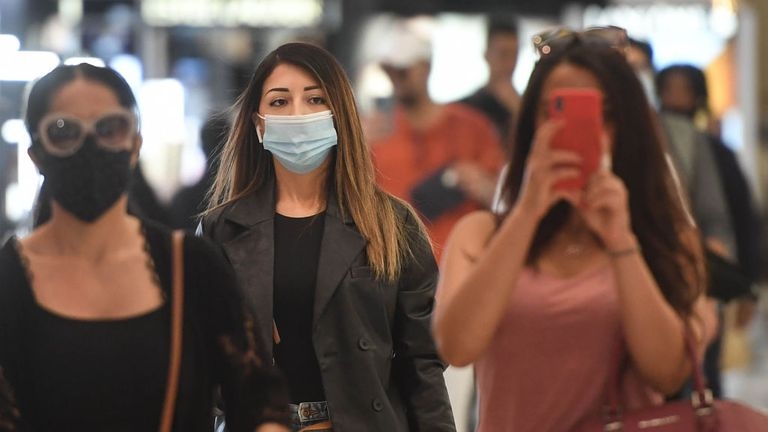 Health leaders are calling for an urgent review to determine whether the UK is properly prepared for the "real risk" of a second wave of coronavirus.
In an open letter published in the British Medical Journal, ministers were warned that urgent action would be needed to prevent further loss of life.
The presidents of the Royal Colleges of Surgeons, Nursing, Physicians, and GPs all signed the letter.
It comes after Boris Johnson announced sweeping changes to England's lockdown.
On Tuesday, the prime minister said pubs, restaurants, cinemas and hairdressers will be able to reopen from 4 July.
The 2m social-distancing rule will be replaced with a "one-metre plus" rule, meaning people should stay at least 2m apart where possible, but otherwise should remain at least 1m apart while taking steps to reduce the risk of transmission, such as wearing face coverings.
The 2m rule will remain in Scotland, Wales, and Northern Ireland, however.
Both the government's chief scientific adviser Sir Patrick Vallance and the chief medical officer for England Professor Chris Whitty stressed Mr Johnson's plan was not "risk-free" at Tuesday's final daily Downing Street coronavirus briefing.
Following the prime minister's announcement, health leaders called for a "rapid and forward-looking assessment" of how prepared the UK would be for a new outbreak of the virus.
"While the future shape of the pandemic in the UK is hard to predict, the available evidence indicates that local flare-ups are increasingly likely and a second wave a real risk," they wrote in the letter.
"Many elements of the infrastructure needed to contain the virus are beginning to be put in place, but substantial challenges remain."
The authors of the letter, also signed by the chair of the British Medical Association, urge ministers to set up a cross-party group with a "constructive, non-partisan, four nations approach", tasked with developing practical recommendations.
"The review should not be about looking back or attributing blame," they said, and instead should focus on "areas of weakness where action is needed urgently to prevent further loss of life and restore the economy as fully and as quickly as possible".
The BBC has approached the Department for Health and Social care for comment.
In the Commons on Tuesday, Mr Johnson said he did not believe there was "a risk of a second peak of infections that might overwhelm the NHS".
Announcing the biggest easing of lockdown yet, he said two households in England will be able to meet indoors and stay overnight - with social distancing.
While he warned all the steps were "reversible", he confirmed the following venues would be able to reopen:
Some other venues will remain closed by law, including nightclubs, casinos, indoor play areas, nail bars and beauty salons, swimming pools and indoor gyms.
Those businesses set to reopen in 10 days' time are awaiting guidance from the government on how they can operate as safely as possible during the coronavirus pandemic.
Initial advice says businesses should keep customers' contact details for 21 days to help support the track and trace system.
But in most cases the government has told companies that more detailed advice will follow soon.
BBC political correspondent Iain Watson said it suggested that decisions on which parts of the economy to reopen were made very recently.
It comes as struggling retailers must pay their quarterly rent to landlords on Wednesday.
Labour is calling for NHS staff to be tested every week for coronavirus so that patient waiting list backlogs can be safely cleared.
Former Conservative health secretary Jeremy Hunt backed that call, writing in the Daily Telegraph that the "costs are small compared to the cost of a second wave" of Covid-19.
The latest figures show a further 171 people had died after testing positive for coronavirus in the UK, taking the total to 42,927.