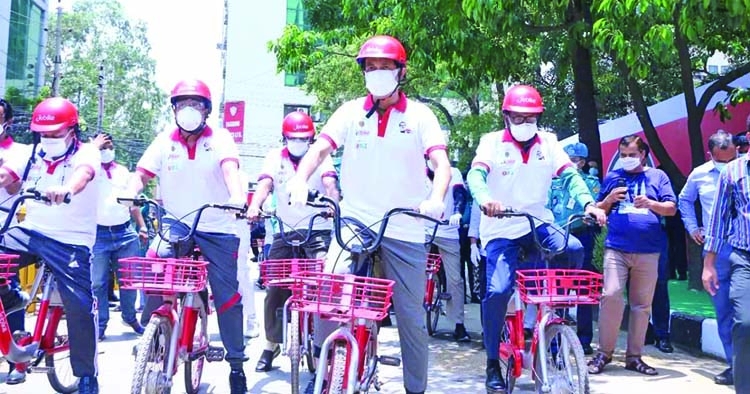 Dhaka North City Corporation (DNCC) Mayor Md Atiqul Islam inaugurated the bicycle ride sharing at Gulshan on Wednesday. -AA
Dhaka North City Corporation (DNCC) Mayor Md Atiqul Islam on Wednesday called upon everyone for using bicycles to present a beautiful Dhaka city to the future generation. He made the call while inaugurating bicycle ride sharing at Gulshan in the capital, reports UNB.
The mayor said, "All over the world, rich and poor, men and women use bicycles. It has been launched experimentally here. Then, there is the plan to expand it to Uttara and the entire DNCC in phases." "This will create employment for many. We are working together for passerby and bicycle lanes," he said.
He urged the city dwellers to use bicycles to maintain social distance and maintain good health. Atiqul Islam said, "Let's use bicycles to save the environment, to reduce carbon emissions.
We should use bicycles to present a beautiful city to future generations. We can even use bicycles to save money. If we want to save Dhaka city, we have to increase the use of bicycles. Using a bicycle will also save time. "
A private entrepreneur 'Jobike' will conduct bicycle ride sharing on a commercial basis in Gulshan, Banani, Baridhara and Niketan areas. Hundreds of bicycles have already been parked at 22 points in these 4 areas. Anyone can use the bicycles at the rate of one taka per minute using the app.