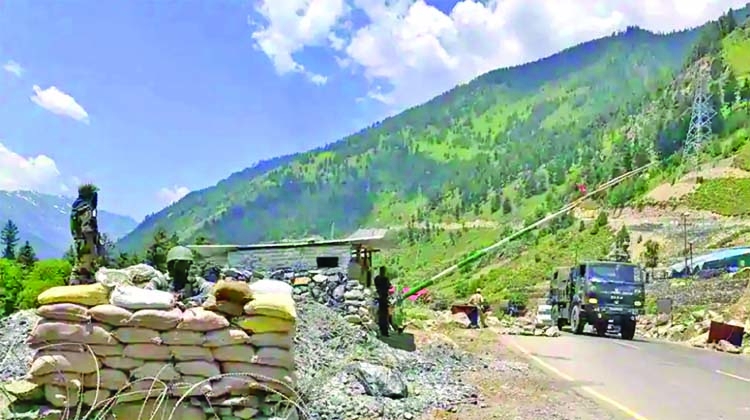 Indian paramilitary soldiers keep guard as Indian army convoy moves on the Srinagar-Ladakh highway at Gagangeer, north-east of Srinagar. -AP
A senior Chinese general authorized his forces to attack Indian troops in the Galwan River valley last week, resulting in a brutal skirmish that killed dozens and dramatically escalated tensions between the two Asian powerhouses, according to a US intelligence assessment.
Gen. Zhao Zongqi, head of the Western Theater Command and among the few combat veterans still serving in the People's Liberation Army, approved the operation along the contested border region of northern India and southwestern China, a source familiar with the assessment says on the condition of anonymity.
According to US News, Zhao, who has overseen prior standoffs with India, has previously expressed concerns that China must not appear weak to avoid exploitation by the United States and its allies, including in New Delhi, the source says, and saw the faceoff last week as a way to "teach India a lesson."
The assessment contradicts China's subsequent assertions about what happened on June 15. And it indicates the deadly and contentious incident - in which at least 20 Indian and 35 Chinese troops died, and reportedly a handful on each side were captured and subsequently released - was not the result of a tense circumstance that spiraled out of control, as has happened before, but rather a purposeful decision by Beijing to send a message of strength to India.
Yet that plan appears to have backfired, as the incident sparked widespread outrage in India that continues a week later. And Beijing's attempts to make India more amenable to future negotiations, including about contested territory, instead appear to have pushed the economic giant closer to the US.
Much is at stake, far beyond territorial control. The US has pressured India for months to back away from employing Chinese tech company Huawei to help build its 5G infrastructure. In the aftermath of June 15 incident Indians were reportedly deleting Chinese social media app TikTok and destroying phones made in China."It does the very opposite of what China wanted," the source says, adding that "this is not a victory for China's military."
It remains unclear the extent to which Chinese President Xi Jinping was involved in the decisions that led to the bloody encounter, though analysts familiar with Chinese military decision making say he would have almost certainly known about the orders.
Troops had massed on both sides of the border in recent months in the northern India region of Ladakh and the southwestern Chinese region of Aksai Chin, causing global concerns of a potential escalation between the two.
Private geo-intelligence firm Hawkeye 360 recently reported that satellite imagery from late May showed a buildup on the Chinese side of what appeared to be armed personnel carriers and self-propelled artillery.
---HT