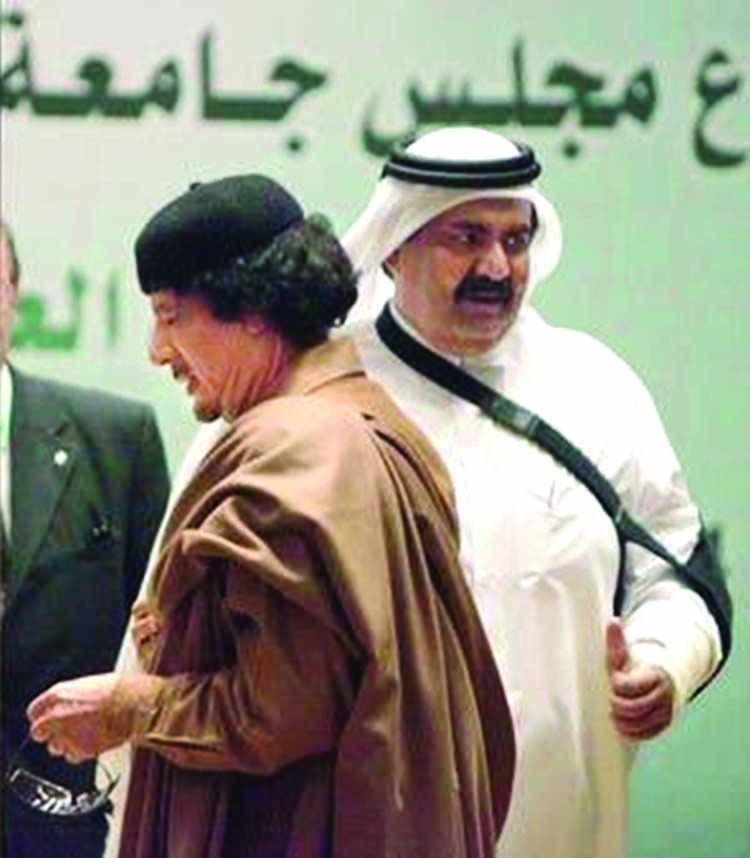 A leaked audio recording that reportedly captured a conversation between former Qatari prime minister Sheikh Hamad Bin Jassim and the late Libyan leader Muammar Gaddafi claims that the Doha-based Al-Jazeera TV channel is controlled by the Muslim Brotherhood.
"Al-Jazeera is controlled, members of the Muslim Brotherhood are controlling the programs on Al-Jazeera," Gaddafi is heard as saying in the recording, which was posted on social media by Qatari opposition activist Khalid Al-Hail."I agree with you, I am telling you this is true," the former prime minister then replied.


The Saudi Gazette was unable to verify the authenticity of the recording.The Muslim Brotherhood, along with Daesh (the so-called IS) and Al-Qaeda, have all been classified as terrorist organizations by the Kingdom, the UAE, Bahrain, and Egypt.
The recordings were secretly taped by Gaddafi during his meetings with world leaders in Libya, which have since been leaked following his death in 2011.
In several other leaked recordings, former Qatari Emir Sheikh Hamad Bin Khalifa Al-Thani and Sheikh Hamad Bin Jassim were heard steering Al-Jazeera's coverage.Saudi Arabia, the UAE, Bahrain, and Egypt had severed all ties with Qatar on June 2017 for supporting terrorism and cozying up to Iran.
The audio recordings between the Qatari leadership and Gaddafi that have been leaked recently have raised controversy over the country's foreign policy.
In another recording leaked from the same year, Gaddafi and the former prime minister can reportedly be heard discussing plans to carve up Saudi Arabia.Sheikh Hamad Bin Jassim did not deny the recording and said that the issue was discussed to appease Gaddafi.
In 2013, Sheikh Hamad handed over power to his son, current Emir Sheikh Tamim Al-Thani. Hamad Bin Jassim stepped down from his positions in government at the time and reportedly has strained relations with the current emir.
---Saudi Gazette