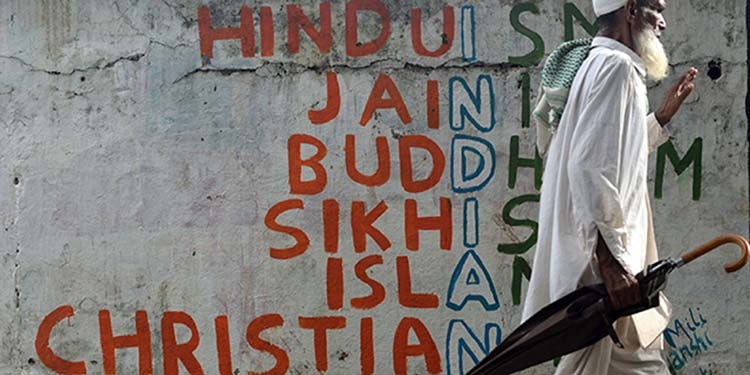 India is a plural country with many religions. While the majority religion is Hinduism, Islam and Christianity are the major religious minorities. While Freedom movement accorded them equal status as religions, the communal forces regard these as religions of alien religions. Lately there are various attempts to coopt them in the umbrella of Hinduism.
The statements of communal forces are no uniform on this and starting from the second Sarsanghchalak M.S Golwalkar, who presented them as ‘internal threat’ to the Hindu nation, the later ideologues tried to use the geographical use of Hindu and even labelled them as Hindus. Murli Manohar Joshi of BJP used the term Ahmadiyya Hindus for Muslims and Christi Hindu for Christians.  The current RSS Chief Mohan Bhagwat at times has stated that since this is Hindustan, all those living here are Hindus.
These efforts are mere face savers, as at ground level the Muslims and Christians in particular are regarded as those belonging to alien religion, lot of Hate has been built up against them through spreading misconceptions against them and selectively picking up the incidents to show them in poor light.
Indian Constitution, outcome of freedom movement, foundation of our republic and protector of our democratic values in articles 25 to 28 gives the provisions of freedom of religion. We all are free to practice, propagate and preach our religions. Those who have faith in religions and those who are agnostics or atheists also have equal right to live with their values.
While freedom of religion is basic to these articles of pure Constitution, last few decades in general and last few years in particular have witnessed decline in the degree of religious freedom. In India nine out of 28 states have brought in anti- conversion laws. The massive violence like major carnages in Mumbai, Gujarat and Muzaffarnagar are very fresh in our memory, the brutal murder of Pastor Graham Stains, the Kandhamal violence are a part of our painful memory.
We recently saw Delhi violence, which killed nearly 52 citizens, mostly innocent, over 2/3 of those killed were Muslims. The occasional and scattered anti-Christian violence has continued all through. More such incidents are coming to light lately. There are some organizations and individual who keep monitoring these incidents in India, there are many at global level, who are chronicling these. Center for Study of Society and Secularism, Mumbai, comes out with annual report and analysis on the same.
Few other organizations like Alliance Defending Freedom are also doing the invaluable work in bringing to our notice the violations of Freedom of religion. Of course, these are few organizations and many more individuals and groups are doing the same. But these all are not too well known in the public domain.
What came forward prominently in recent times in public domain was the US state departments report on Human rights in India. Before mentioning the salient features of the report let me make it clear, that various US based organizations in particular come out with these reports but they are not binding on the policies of the state. While some US presidents have ineffectively talked about promotion of human rights globally, by and large US foreign policy is not guided by these considerations of human rights violation.
Though of course in some very glaring cases they do take action, like denial of Visa to Narendra Modi in the wake of 2002 Gujarat carnage. These are few exceptions when Human rights status, religious freedom in other countries has guided their policy.
One also knows that US itself indulges in various such violation, the Abu Graib prison and Guantanamo bay being the most glaring among themThere are different opinions on how to assess these reports and the role of these monitoring groups. By and large these do show as a mirror of what is happening in particular countries. These reports guide the human rights defenders to give direction to their work.
The office of International Religious Freedom, United States Dept. of State, in its 2019 report released on June 10 highlights the violation of freedom of religion. It is comprehensive and systematic reporting on Indian minorities. The report is an in-depth coverage and analysis of challenges faced by religious minorities, especially Muslims, Christians and lower caste Hindus (Dalit) in India.
The highlight of this is the religiously motivated killings, assaults, discrimination, and vandalism. It also refers to the Ministry of Home Affairs data, which reports 7,484 incidents of communal violence during 2008-2017 in which more than 1,100 people were killed.
The report cites specific examples of horrific lynching’s of Muslims, Christians and Dalits. "While the lynching’s are atrocious in and of themselves, what should alarm and galvanize the international community to action is the continuing incendiary rhetoric that is now part of mainstream discourse,"
There are other noted organizations like Open Doors, whose monitoring tells us the condition of safety of Christians. “Since the current ruling party took power in 2014, incidents against Christians have increased, and Hindu radicals often attack Christians with little to no consequences.”
The team of state department, which wanted to visit India for understanding the issue in depth has been denied visa on the ground that India is not guided by these external observations. It is a tough call, in the globalizing World. Can we hide our dirty linen under the carpet? If we have nothing to hide, we should welcome all the efforts of all organizations and learn from them.
And finally, the violation of freedom of religion is totally against the said articles of Indian Constitution, which tells us that it is the duty of state to protect this freedom of religion. The problem is with communalism on the rise those out to torment religious minorities and violate the ‘freedom of religion’ of others enjoy great deal of impunity. We need a humane India which not just tolerates but celebrates diversity, which at one time was the core strength of our freedom movement.


The writer is a social activist and commentator based in India.
The views are personal