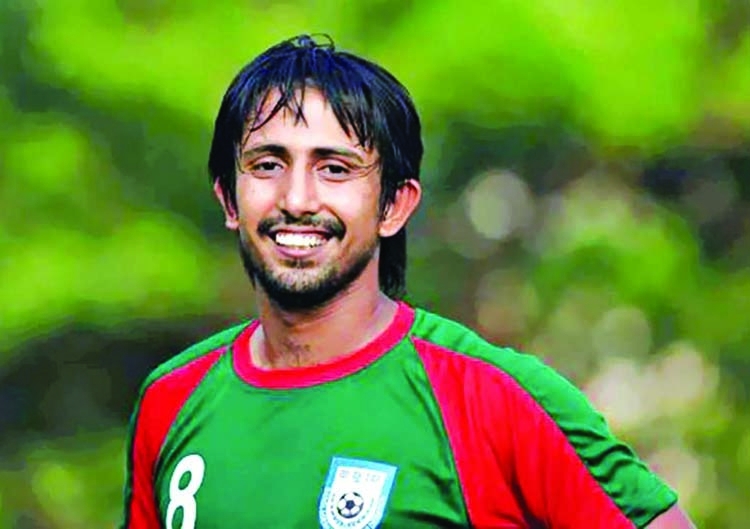 Mamunul Islam Mamun
Bangladesh experienced national footballer Mamunul Islam Mamun believes Bangladesh football team is now more balanced team. He urged supporters not to talk nonsense about the national team. Many football fans of the country have become depressed and angry when the booters of national football team failed perform up to the mark at the international level.
Despite the progress in other fields of football, all the achievements are being covered up as the national team has not been able to get good results - such criticism has been leveled against footballers for a long time; but experienced national team player Mamunul Islam dismissed the allegations, saying. "The national team's game has improved. Those who watch the game will understand that," he said this in a video message on Wednesday.
He also appealed to their fans to give up such a kind of negative comments and sought for a positive support for the betterment of football.
"Bangladesh are now more balanced team. Our recent performances such as to qualify in the second round of Asian Games, win against Qatar, competitive performance in every FIFA-AFC qualifiers games, draw with India could be considered some good examples of professionalism and the recent improvement.
I request you to give us positive support so that we'll be motivated. I also request you to join us on the pitch and to witness live games. Please avoid all negative comments," Mamunul added.
Bangladesh Football Federation (BFF) is expected a residential camp for the national team in August. BFF decided to initially call 44 booters and coaching staffs at the first week of August, who will be isolated for 10 to 15 days and undergo a COVID-19 test before starting the camp. After that, some 30 to 35 booters will be shortlisted for the final camp which is expected to kick-off at the mid of August.
The isolation training camp will be held at a safe venue in Dhaka or outside of the city. National booters have been off-field for a long time, so that BFF will try to arrange some practice matches against foreign teams at foreign soil as a part of the preparation for booters.
Bangladesh started their campaign in joint qualifiers with a 0-1 defeat against Afghanistan in the first match in the Tajik capital of Dushanbe on September 10, conceded a 0-2 goals defeat against Asian champions Qatar in the second match in Dhaka on October 10, played to a 1-1 draw against India in their third match in Kolkata on October 15 and conceded 1-4 goals defeat against Oman in the fourth match at the Seeb Sports Stadium in Al Seeb city of Oman on November 14 last year.
According to the new schedule proposed by AFC, Bangladesh will host Afghanistan India and Oman on October 8, November 12 and 17 respectively while meeting Asian champions Qatar in their lone away match on October 13.
In the five-team Group E, Qatar is now leading the point table with 13 points from five matches while Bangladesh are at the bottom place with one point from four matches. Among others, Oman secured 12, Afghanistan 4 and India 3 points.