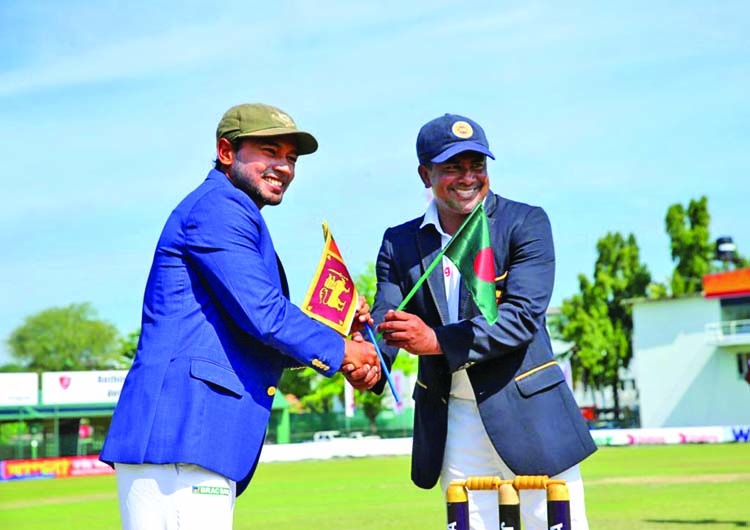 Sri Lankan skipper Rangana Herath (R) and Bangladesh captain Mushfiqur Rahim (L) posed for a photo before kick-off the first Test match at Galle in 2017. -Collected
The Bangladesh cricket team's tour of Sri Lanka next month was postponed on Wednesday amid the coronavirus pandemic scare, the International Cricket Council (ICC) confirmed in twitter.
"Bangladesh's tour to Sri Lanka, scheduled to take place next month, has been postponed," the ICC posted on its Twitter handle. Bangladesh was scheduled to tour Sri Lanka next month for a three-Test series.Sri Lanka Cricket issued a statement to say that Bangladesh pulled out due to its players' "lack of preparation" due to the pandemic.
"The Bangladesh Cricket Board has informed SLC that a conducive environment has still not arrived for their players to take part in an international cricket series, purely due to the lack of preparation for its players, caused by the COVID-19 pandemic," the statement read.
"BCB and Sri Lanka Cricket have agreed that Bangladesh National Team's tour of Sri Lanka which was scheduled to be held during July 2020 will not take place and will be deferred to a mutually planned later date," it added.
Earlier, Bangladesh Cricket Board's (BCB) chief executive Nizam Uddin Chowdhury had said that New Zealand's tour to Bangladesh has been postponed due to the concerns regarding COVID-19.New Zealand was slated to tour Bangladesh for two Tests, to be played in August-September.
"In the present COVID-19 pandemic scenario, hosting a full cricket series in August 2020 will be a challenge in terms of preparations and we cannot take chances with the safety and health of players, support staff and related stakeholders," ESPNcricinfo had quoted Chowdhury as saying. "
Under these circumstances, the BCB and NZC have felt that the best way forward would be to defer the series," he had addedLast week, Bangladesh's former ODI captain Mashrafe Mortaza, Nazmul Islam and Nafees Iqbal also tested positive for the deadly contagion.
The Bangladesh Cricket Board had earlier postponed its Test tour of Pakistan in April apart from the Ireland and UK tour in May. Australia's tour of Bangladesh, originally scheduled for June, has also been deferred.International cricket is set for resumption next month when England hosts the West Indies in a Test series.