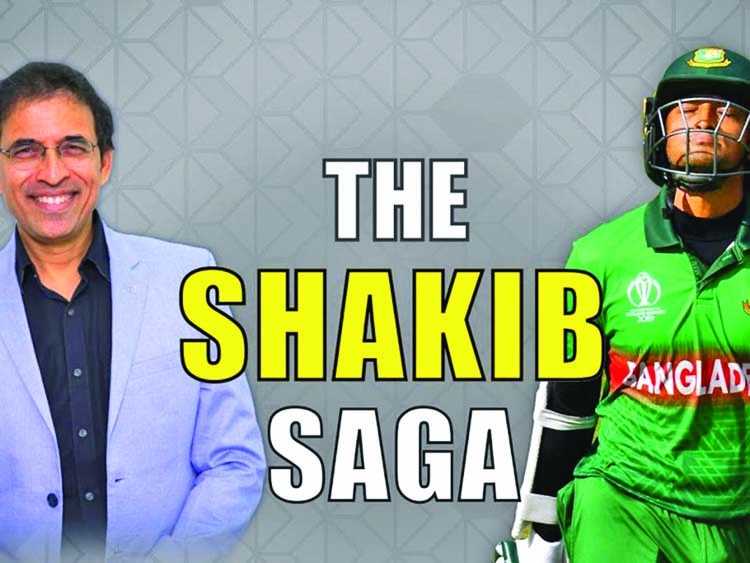 Cricket-mad Bangladesh and its crazy fans were rudely shocked when the International Cricket Council (ICC) imposed a two-year ban on Bangladesh all-time best all-rounder Shakib Al Hasan in October last year for violating its anti-corruption code after he failed to report three approaches by match-fixing syndicates - all in 2018.
Country's best all-rounder who had been playing international cricket for more than 14 years and was the Bangladesh national team's captain for Test and Twenty20 formats, was not been found guilty of "fixing" any cricket matches but he was only penalized for not informing the authorities about the approaches.With one year of his ban suspended, Shakib is set to resume international cricket in October this year.
Even the media reports suggested that Shakib was approached by bookies to manipulate a cricket match, but he did not report it to the respective authorities, which is an unlawful act as per the anti-corruption rule of the ICC.
But there was only one question on everyone's lips: why did country's one of the most experienced cricketers not inform the ICC or the BCB about the offer of gambling after playing cricket for almost 15 years? From fans to cricket experts and the general public, it was a mystery. Finally Shakib himself revealed the secret to renowned cricket commentator Harsha Bhogle on Cricbuzz in Conversation.
Shakib said, "I took the approaches too casually. When I met the anti-corruption guy and told them and they knew everything. I gave them all the evidence and they knew everything that happened... To be honest, that's the only reason I was banned for a year, otherwise I'd have been banned for five or 10 years,"
"But I think that was a silly mistake I made. Because with my experience and the amount of international matches I've played and the amount of ICC's anti-corruption code of conduct classes I took, I shouldn't have made that decision [to not report], to be honest. I regret that. And I think no one should take such messages or calls (from bookies) lightly or leave it away... We must inform the ICC ACSU guy to be on the safe side and that's the lesson I learnt, and I think I learnt a big lesson."
The suspended all-rounder however has expressed his determination to return after he completes his ban."This time and this situation taught me things completely differently. Previously I was playing for the country, for myself, for my family. But, now what I only think is what I can do to give back to the people who have been supporting me for 12-15 years and are now disappointed with what I did, and how can I repay them. Now that's the only mentality I have."
Shakib added Shakib, who has played 56 Tests, 206 ODIs and 76 Twenty20 internationals, is by far Bangladesh's best known player, having topped the ICC all-rounder rankings in all three formats several times since 2009. He starred for the team during the ICC World Cup in England last year, where he scored over 600 runs and collected 11 wickets. He was the third-highest scorer at the 2019 Cricket World Cup.
In the World Cup, he also became the fastest and only the fifth cricketer to reach 5,000 runs and 250 wickets in ODIs. The suspension against Shakib came at a time when he was at loggerheads with Bangladesh cricket officials after leading a player revolt.
The turmoil over Shakib came just days before Bangladesh were to embark on their first-ever full-pledged bilateral series in India featuring three Twenty20 internationals and two Tests.
Shakib was expected to lead the team in both series. However Bangladesh were humiliated in India tour in absence of Shakib.  In 2008, Shakib faced the same situation and he reported BCB at that time.