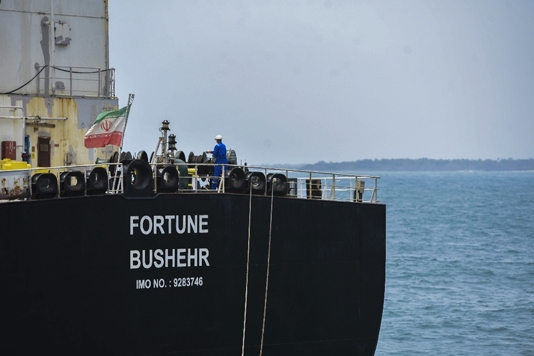 The United States sanctioned Wednesday five Iranian ship captains who delivered oil to Venezuela, as Washington ratcheted up pressure against President Nicolas Maduro, whose government it considers illegitimate.
US Secretary of State Mike Pompeo said that the Iranian-flagged oil tankers, which delivered some 1.5 million barrels of gasoline and oil to Venezuela in recent weeks, had been placed on the US Treasury’s Office of Foreign Assets Control (OFAC) blacklist.
“Mariners who do business with Iran and Venezuela will face consequences from the United States of America,” Pompeo said.
Venezuelan Foreign Minister Jorge Arreaza responded on Twitter, calling the move “more proof of the hatred by (US President Donald) Trump’s hawks against Venezuela.”
“As a result of today’s sanctions, these captains’ assets will be blocked. Their careers and prospects will suffer from this designation,” Pompeo said.
“The rogue regimes in Caracas and Tehran are unified by their penchant for repressing their people, corruption, self-enrichment, and gross mismanagement of their people’s wealth,” Pompeo added.
The move comes as Venezuela accused the United States Wednesday of “an act of provocation” after a US warship steamed close to the South American country’s territorial waters the day before.
The vessel sailed in an area that “the illegitimate Maduro regime falsely claims to have control over,” the US Southern Command (SOUTHCOM) said in a statement.