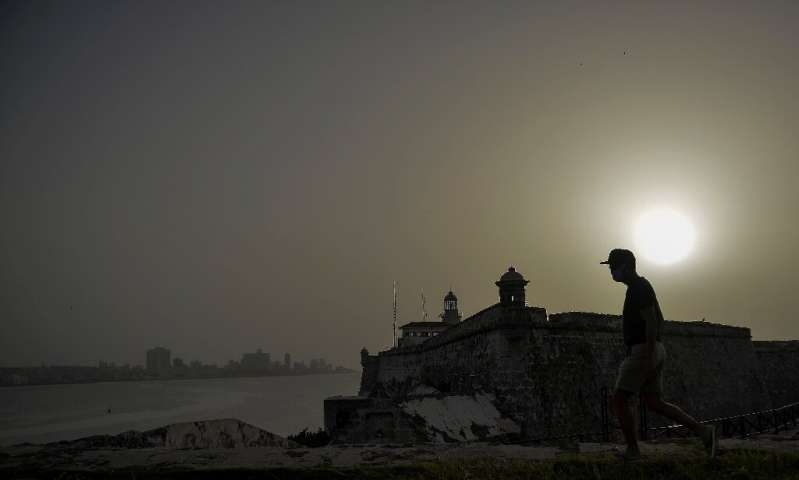 A massive cloud of Saharan dust darkened much of Cuba on Wednesday and began to affect air quality in Florida, sparking warnings to people with respiratory illnesses to stay home.
The dust cloud swept across the Atlantic from Africa over the past week, covering the Caribbean island of Puerto Rico since Sunday and hitting south Florida in the United States on Wednesday, authorities there said.
Conditions over the Cuban capital Havana are expected to worsen on Thursday, specialists on the Communist-run island reported.
Francisco Duran, head of Epidemiology at the Ministry of Health, said the cloud is likely to "increase respiratory and allergic conditions".
Air quality in Miami is currently "moderate" the city's health department said, asking people with respiratory problems to stay home.
And weather forecasters for the French Caribbean islands of Guadeloupe and Martinique warned residents that the area was suffering its worst haze in at least a decade.
Powered by strong winds, dust from the Sahara travels across the Atlantic Ocean from West Africa during the boreal spring.
But the density of the current dust cloud over Cuba "is well above normal levels," said Cuban meteorologist Jose Rubiera.
"The highest concentration over the capital will occur tomorrow," he said.
According to the Institute of Meteorology, temperatures in Cuba's eastern province of Guantanamo reached a record for the time of year of 37.4 degrees Celsius on Wednesday.
In Havana, scientist Eugenio Mojena said the phenomenon "causes an appreciable deterioration in air quality."
Mojena said the dust clouds are loaded with material that is "highly harmful to human health."
Mojena listed "minerals such as iron, calcium, phosphorous, silicon and mercury" in the dust, and said the clouds also carried "viruses, bacteria, fungi, pathogenic mites, staphylococci and organic pollutants."
Duran ruled out any link with the coronavirus pandemic.
The government said its epidemic is under control and last week began to relax quarantine measures, with Havana the only area where restrictions remain because it continues to register infections.
The island reported a single new case on Wednesday, bringing the total number of infections to 2,318, with 85 fatalities from Covid-19.