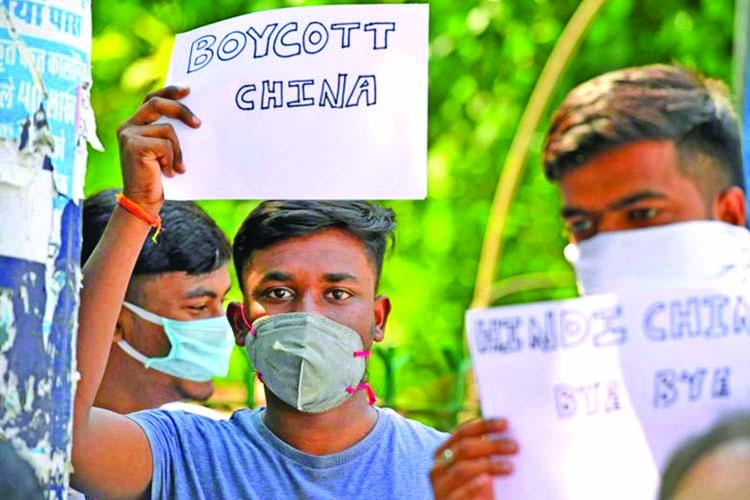 Protesters call to boycott Chinese goods during a demonstration in New Delhi. -AFP
One of Delhi's main hotel associations said Thursday that its members are barring Chinese guests, as calls for a boycott of Chinese goods gather pace following a border clash that killed 20 Indian soldiers.
The June 15 battle was the first time troops have died in combat along the Asian giants' Himalayan border in 45 years, and has been followed by a build-up of forces even as talks continue. Mr Sandeep Khandelwal, president of the Delhi Hotel and Restaurant Owners Association, said the decision covering 75,000 hotel rooms in the Indian capital was to "support our government in this war-like situation with China".
"Why should we allow them to earn money from India?" Mr Khandelwal told AFP. The association, which represents mostly three- and four-star hotels, will also encourage members to stop using Chinese products. Although almost 300,000 Chinese visited India in 2018, the boycott is largely symbolic as travel restrictions because of the coronavirus have seen foreign visitor numbers dwindle.
Some hotels remain shuttered despite a lockdown being gradually eased. The move, however, demonstrates growing anti-China sentiment in India - particularly on social media, which has been swamped with calls to spurn Chinese products. There have also been small demonstrations with Chinese flags burned.
E-commerce giants including US giant Amazon - which sell huge volumes of Chinese-made electronic items - have agreed to display the country of origin of goods for sale on their platforms, media reports said Thursday.
Earlier this week Prime Minister Narendra Modi's government ordered all sellers to do the same on its GeM portal, which is used for tens of billions of dollars worth of state purchases.China's Xiaomi - India's top cellphone brand which has factories in the country - is covering its logo on shopfronts in major cities, with banners reading "Made in India".
"The company officials told us to do this to protect us from protesters or politicians who could damage the property as anti-China sentiments are on the rise," said Jignesh, the owner of one Xiaomi shop in Mumbai. "But demand has not come down for smartphones at all and people are still buying these gadgets," he told AFP.
Goods made in China, including some raw materials vital to Indian pharmaceutical firms, are also starting to pile up at Indian ports and airports because of more stringent customs checks, media reports said.
Despite long-prickly relations, India and China have steadily built up strong economic ties in recent years. Annual bilateral trade is worth some US$90 billion (S$125.29 billion), with a deficit of around US$50 billion in China's favor.
----AFP, New Delhi