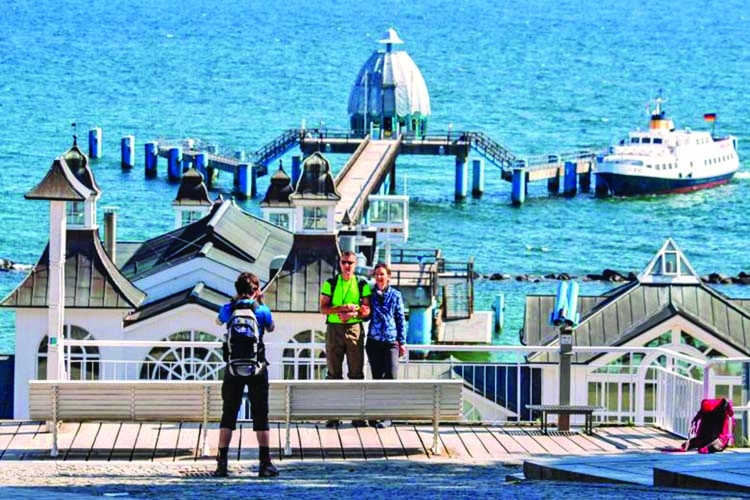 Germany is one such country that has suffered a major setback. -AFP
Europe has seen a surge of Covid-19 cases since countries began easing restrictions aimed at curbing the spread of the potentially fatal virus, the World Health Organization (WHO) said Thursday. "Last week, Europe saw an increase in weekly cases for the first time in months," the WHO's regional director for Europe Hans Kluge told reporters.
He said more than two dozen countries in Europe had seen resurgences of the deadly virus. "Thirty countries have seen increases in new cumulative cases over the past two weeks. In 11 of these countries, accelerated transmission has led to very significant resurgence that if left unchecked will push health systems to the brink once again in Europe," he warned. Dr Kluge did not identify the countries by name, nor provide detailed numbers.
Germany, which began easing measures about seven weeks ago, is however one such country that has suffered a major setback. On Tuesday, it reimposed lockdowns on more than 600,000 people in two districts in the western part of the country after an outbreak at a slaughterhouse infected more than 1,500 workers. Portugal also imposed new restrictions in and around its capital on Tuesday.
Dr Kluge noted that the European region was reporting a decreasing proportion of global cases than earlier in the year, as the pandemic hits the Americas with full force, but Europe continues to report close to 20,000 new cases and over 700 new deaths daily.
Dr Kluge meanwhile singled out Poland, Germany, Spain and Israel for their swift responses to outbreaks in schools, coal mines, and food production settings in recent weeks. "Where new clusters of cases appeared, these have been controlled through rapid and targeted interventions. This is very good news," he said.
A State Department spokesperson told CNN: "We are committed to coordinating with our European partners and allies as we look forward to reopening our economies and easing restrictions. We continue to urge US citizens to check the websites of the relevant US embassy or consulate websites for information on entry restrictions, foreign quarantine policies, and urgent health information provided by local governments."
Among the options being discussed are travel restrictions based on US geographic regions, rather than a sweeping ban on the entire country, since some regions have higher infection rates than others, two EU officials told CNN.
Another EU diplomat told CNN that the permanent representatives of the EU member states to the European Union had discussed this issue Monday and would discuss it again Wednesday. The diplomat said they had not seen a list of countries, only of criteria. Included in those criteria is the incidence of coronavirus per 100,000 people over the past 14 days. Reciprocity is also a consideration, the EU diplomat added.
Earlier this year, the US severely restricted travel from large parts of Europe due to coronavirus concerns. The White House has thus far shown very little interest in engaging on the issue, according to two European officials. "The US travel ban is far more strict, so it's hard to imagine them putting up a fuss for this, and they haven't," a senior European official said.
--AFP, Copenhagen