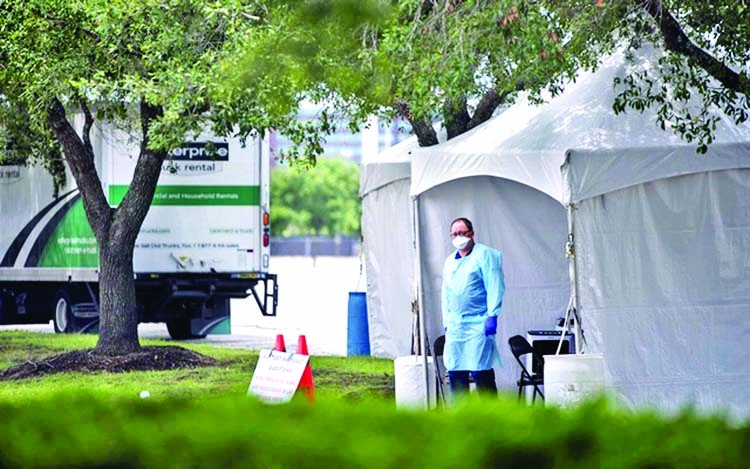 A health care worker at a coronavirus testing site in Houston, June 24, 2020. Texas Gov. Greg Abbott, the governor of the country's largest Republican-controlled state, reopened Texas in May, eager to be part of President Trump's push to restart the eco
The United States reported 36,880 new coronavirus cases on Wednesday, the largest one-day total since the start of the pandemic and more than two months after the previous high.
The number of infections indicated that the country was not only failing to contain the virus, but also that the caseload was worsening - a path at odds with many other nations that have seen steady declines after an earlier peak.
Cases in the United States had been on a downward trajectory after the previous high of 36,739 cases on April 24, but they have roared back in recent weeks, reports New York Times.
The resurgence is concentrated largely in the South and West. Florida, Oklahoma, South Carolina and Texas reported their highest single-day totals on Wednesday, but case numbers have been rising in 29 states.The tally of new cases, based on a New York Times database, showed that the outbreak was stronger than ever.
The elevated numbers are a result of worsening conditions across much of the country, as well as increased testing - but testing alone does not explain the surge. The percentage of people inFlorida who have tested positive for the virus has risen sharply. Increases in hospitalisations also signal the virus' spread.

Some states, including New York, which at one point had the most daily virus cases, have brought their numbers under control. Hoping to keep it that way, New York - along with Connecticut and New Jersey - said it would institute a quarantine for some out-of-state travellers.
As of Wednesday, more than 2.3 million Americans have been infected and about 122,000 have died.Gov. Gavin Newsom of California said that his state had recorded more than 7,000 new cases over the previous day.
In Florida, Gov. Ron DeSantis gave no indication that the state would roll back its economic opening, but he urged residents to avoid closed spaces with poor ventilation, crowds and close contact with others.
DeSantis, a Republican, continued to attribute the rising infections, especially in cities, to younger people who have started to socialise in bars and homes, in spite of rules in many municipalities prohibiting group gatherings.
He pressed older people to keep staying home as much as possible, and pleaded with young people to be responsible."You need to do your part and make sure that you're not spreading it to people who are going to be more at risk for this," he said.
Gov. Roy Cooper of North Carolina announced that the state would pause reopening for three weeks and require face masks. In Texas, more than 4,300 people with the virus are hospitalised, more than double the number at the beginning of June.
The World Health Organization warned Wednesday that if the Americas were not able to stop the spread of the virus, there may be a need to impose - or reimpose - general lockdowns.
"It is very difficult to take the sting out of this pandemic unless we are able to successfully isolate cases and quarantine contacts," said Dr. Michael Ryan, the executive director of the WHO health emergencies program. "In the absence of a capacity to do that, then the spectre of further lockdowns cannot be excluded."
He said that the growing number of coronavirus cases in the Americas had not peaked and that the region was likely to see sustained numbers of cases and deaths in the coming weeks. Brazil, Chile and Peru are among the countries with the highest caseloads.