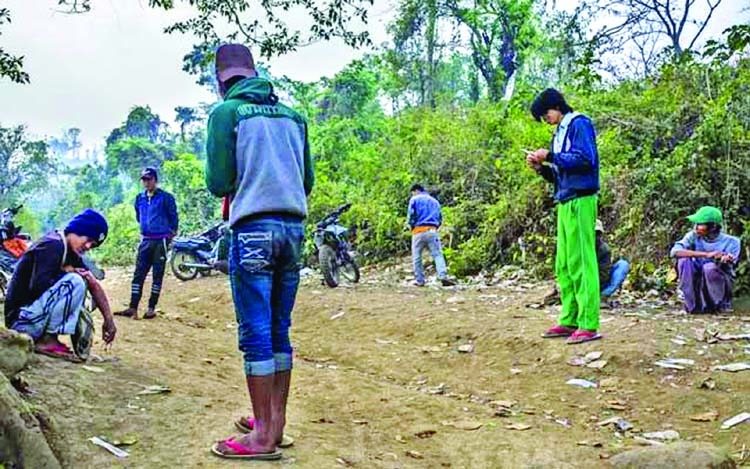 Drug users in Lashio, in the northern Shan State of Myanmar, April 2, 2019. -NYT
Rising unemployment and reduced opportunities caused by the coronavirus pandemic are likely to disproportionately affect the poorest, making them more vulnerable to drug use and also to drug trafficking and cultivation in order to earn money, the UN says in a new report.
Around 269 million people used drugs worldwide in 2018, which is 30 percent more than in 2009, while over 35 million people suffer from drug use disorders, according to the latest World Drug Report 2020, released on Thursday by the United Nations Office on Drugs and Crime or UNODC.
The report also analyses the impact of COVID-19 on the drug markets. Border and other restrictions linked to the pandemic have already caused shortages of drugs on the street, leading to increased prices and reduced purity, the report says.
"Vulnerable and marginalised groups, youth, women and the poor pay the price for the world drug problem. The COVID-19 crisis and economic downturn threaten to compound drug dangers further still, when our health and social systems have been brought to the brink and our societies are struggling to cope," said UNODC Executive Director Ghada Waly.
She urged governments to show "greater solidarity" and provide support, to developing countries most of all, to tackle illicit drug trafficking and offer evidence-based services for drug use disorders and related diseases.
Due to COVID-19, traffickers may have to find new routes and methods, and trafficking activities via the darknet and shipments by mail may increase, despite the international postal supply chain being disrupted, according tothe report.
The pandemic has also lead to opioid shortages, which in turn may result in people seeking out more readily available substances such as alcohol, benzodiazepines or mixing with synthetic drugs.More harmful patterns of use may emerge as some users switch to injecting, or more frequent injecting, the UNODC said in the report.
If governments react the same way as they did to the economic crisis in 2008, when they reduced drug-related budgets, then interventions such as prevention of drug use and related risk behaviours, drug treatment services, the provision of naloxone for management and reversal of opioid overdose could be hard hit, the UN agency said.
Interception operations and international cooperation may also become less of a priority, making it easier for traffickers to operate, it added.The report flagged cannabis as the most used substance worldwide in 2018, with an estimated 192 million people using it globally.
Cannabis also remains the main drug that brings people into contact with the criminal justice system, accounting for more than half of drug law offences cases, based on data from 69 countries covering the period between 2014 and 2018.
The report noted that opioids remain the "most harmful". Over the past decade, the total number of deaths due to opioid use disorders went up 71 percent, with a 92 percent increase among women compared with 63 percent among men.Drug use increased far more rapidly among developing countries over the 2000-2018 period than in developed countries.
Adolescents and young adults account for the largest share of those using drugs, while young people are also the most vulnerable to the effects of drugs because they use the most and their brains are still developing, the UNODC said.The report also points out that low-income countries still suffer a critical shortage of pharmaceutical opioids for pain management and palliative care.
More than 90 percent of all pharmaceutical opioids available for medical consumption were in high-income countries in 2018 comprising around 12 percent of the global population, while the low and middle-income countries comprising 88 percent of the global population are estimated to consume less than 10 percent of pharmaceutical opioids.
"Poverty, limited education and social marginalisation remain major factors increasing the risk of drug use disorders and vulnerable and marginalised groups may also face barriers to getting treatment services due to discrimination and stigma," the UN agency said.