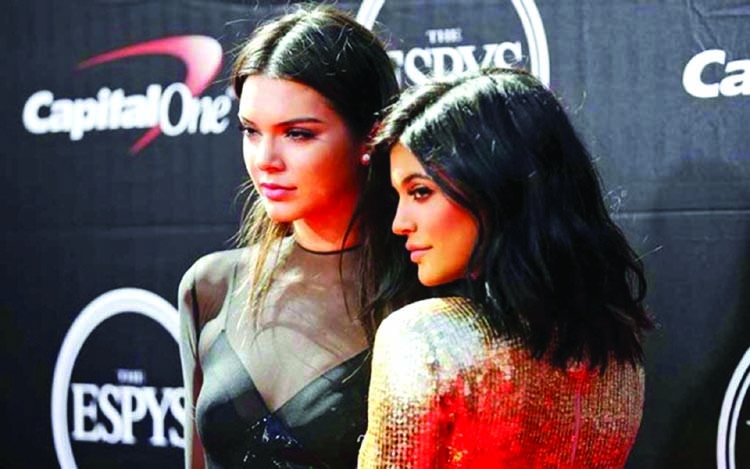 US reality TV stars Kendall and Kylie Jenner have denied accusations of not paying workers producing for their joint fashion line saying the brand's owner does not produce in Bangladesh.
A representative says their relationship to an international apparel company, Global Brands Group, has been misidentified, according to Teen Vogue.Kylie, who first appeared on Forbes Billionaires list in 2019 at 21, has faced intense anger on social media after reports on the alleged non-payment of workers surfaced.
She has also reportedly limited her Instagram comments after fans demanded that she pay the workers. With 182.3 million followers, she is the fourth most followed person on the entire app and second most followed woman.
Several news publishers reported that the Kendall + Kylie clothing line is owned by Global Brands Group, which has decided not to pay the workers in Bangladesh by cancelling orders due to a drop in sales amid the coronavirus pandemic.
Citing an email from a representative for Kylie, Teen Vogue on Wednesday said: The Kendall + Kylie brand is owned by Canada Inc and the brand does not produce in Bangladesh. "So [these allegations are] not accurate," the representative said.

When asked about its relationship with Global Brands Group, the representative told Teen Vogue: "There was a past relationship with CAA-GBG years ago. Canada Inc worked with them in a sales capacity for Europe and South America for sales only."
Kendall + Kylie, however, was listed under GBG's "Kids" brands until Tuesday.Another representative for the brand confirmed Teen Vogue that "they don't have any affiliation with GBG" and were "working on getting the brand removed from the website".
Remake, a non-profit against exploitation in fashion, had earlier called on the Jenner sisters and other celebrities to pay the factory workers for the work they did ahead of the COVID-19 pandemic.
Remake told Teen Vogue it had received word from a Kendall + Kylie representative that they do not have "current" orders with Global Brands Group and "will pursue legal action if we didn't remove our posts and apologize".
The fashion group added. "We ask: do KENDALL + KYLIE know who makes their label? And if the women have been paid during the crisis? Until we receive clear answers from the team that KENDALL + KYLIE have proof they paid garment makers, we will not back down."
Kylie, half-sister of Kim, Khloe and Kourtney Kardashian, debuted Kylie Cosmetics in 2016 with $29 lip kits containing matching lipstick and lip liner.She first grabbed the spotlight in the "Keeping Up with the Kardashians" reality TV show she starred in with her mother and siblings.
---Reuters