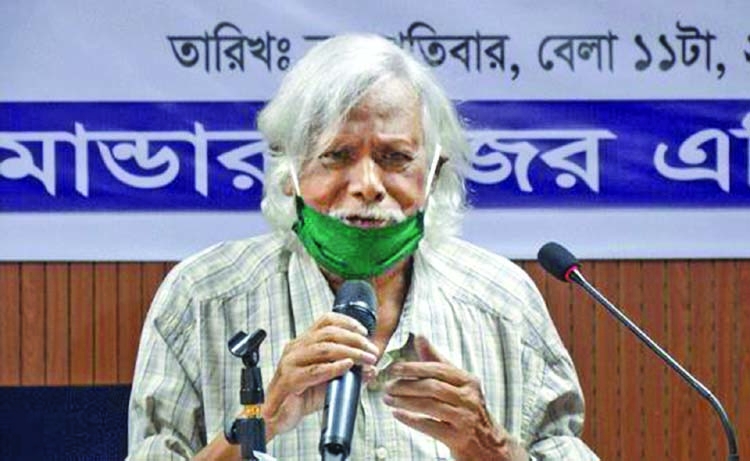 Zafrullah Chowdhury, the trustee of Gonoshasthaya Kendra, has questioned the government's efforts and plans to tackle the coronavirus outbreak.
"The government is trying to catch a black cat in a dark room. They are not thinking about how the coronavirus crisis can be overcome," he told a discussion at Gonosha-sthaya Nagar Hospital in Dhaka's Dhanmondi on Thursday, reports bdnews24.com.
The 79-year-old is staying at the hospital after his recent recovery from COVID-19. He had taken plasma therapy, but is still suffering from pneumonia, a doctor said.Zafrullah, a public health activist, urged the people to raise their voices and launch a strong movement for a healthy healthcare system."You all know that medical treatment in Bangladesh is so costly that people go broke," he said.
In a written statement, he said his 10-day hospital bill totalled Tk 170,000, including fees for intensive care and cabin rent. Other private hospitals charge up to Tk 150,000 daily for the same treatment, he said.
Zafrullah claimed drugs prices will halve in Bangladesh if the authorities change the system of indicative price, which he said former prime minister Khaleda Zia introduced on advice from Beximco Group boss Salman F Rahman.
Zafrullah thanked Prime Minister Sheikh Hasina, BNP chief Khaleda and others for enquiring about his health. Muhibullah Khandaker, the coordinator of Gonoshasthaya's COVID-19 Dot Blot Project, said the Directorate General of Drug Administration has not yet informed them about approval of the coronavirus testing kits nine days after the submission of a report on trials.
Meanwhile, Gonoshasthaya Kendra (GK) on Thursday night said the Directorate General of Drug Administration (DGDA) did not approve its GR Covid-19 antibody testing kit.In a press release, GK said the DGDA did not accept the recommendations of the Technical Committee of Bangabandhu Sheikh Mujib Medical University (BSMMU) and denied registration of the GR Covid-19 rapid antibody testing kit.
The Gonoshasthaya Kendra described the DGDA's decision as unfortunate at this emergency situation of the country."We'll make our next course of action (in this regard) public very soon," it added. Earlier on June 17, BSMMU submitted its report on the GK's antibody kit to the DGDA.