Letter sent to artistes to resume shooting with slogan 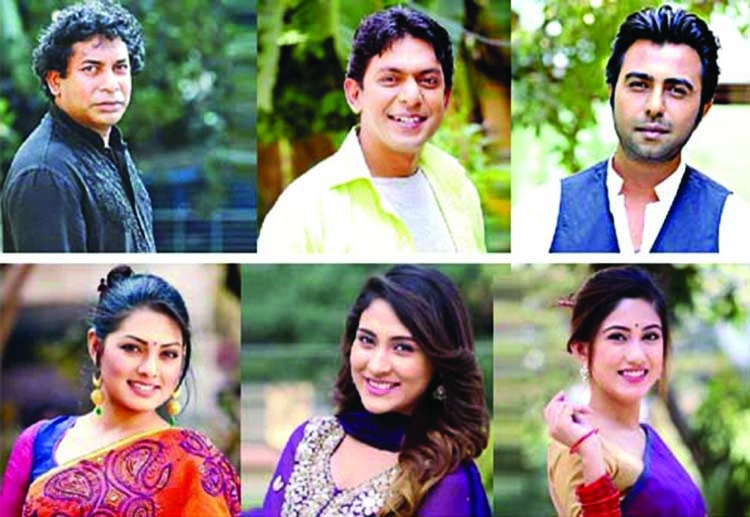 MosharrafKarim, ChanchalChowdhury, Apurba, NusratImrozTisha, MehzabinChowdhury, SafaKabir. - Collected
From 20thMarch shooting of the dramas was stopped for the current situation. After that, at the request of many producers and writers, the inter-organizations decided to start shoot again from May 17. However, various conditions are imposed in that regard including health guidelines.
Shooting is going on in compliance with most of the conditions. It is known that many artistes including Maznun Mizan, Jyotika Jyoti, Tasnuva Tisha, Shyamal Mawla have been busy in shooting.
However, most of the popular artistes and directors of the country are still observing the situation from their homes. On the other hand, the Eid of sacrifice is nearing. Most TV channels are re-broadcasting old titles in the absence of new dramas. Moreover, due to the lack of star artistes, many directors are not able to start shooting.
In this regard, Syed Ashiq Rahman, the chief executive of the private channel RTV, has taken a different initiative on by emphasizing on this issue. He has sent a letter to the homes of several notable artistes of the country.
In that letter he requested the artistes to return to shooting. In the letter he has highlighted several humanitarian reasons. One of which is that due to the reluctance of popular artistes, many directors are still unable to return to work.
In his remarks he said, "You can stay home for a few months without working. But most of the staff involved in the shooting survives from hand to mouth. If you are regular in shooting, they will also get work, their life and family will live. New dramas will also return to the TV screens and life will return to the whole TV industry."
The special letter, signed by RTV chief Dewan Shamsur Rakib, reached Mosharraf Karim, Nusrat Imroz Tisha, Chanchal Chowdhury, Apurba, Afran Nisho, Tahsan Khan, Mehzabin Chowdhury, Tousif Mahbub, Tanjin Tisha and Safa Kabir. It is learned that the company has decided to send the letter to more artistes.
Meanwhile, the letter sent to the artistes with the slogan 'Shabar Jonno Amra' said, "Even after shooting was permitted, low-income artistes are in unlimited financial trouble as popular artistes like you have not started regular work considering the situation.
For all of us, as part of this effort, we kindly request you to participate in multiple dramas / telefilms on any channel next Eid, considering the livelihoods of your colleagues and all those involved in the shooting, following proper health rules. Your participation may save the life of your colleagues and the person involved in the shooting."